Today comes news of the latest in the long litany of revelations of how the Arabs have been fighting a century-long war against any Jewish state or political presence in the land of Israel, while getting a deeply naive West to consider Arabs potential "peace partners" or at least an equally-aggrieved party in a conflict that is dubiously styled the "Palestinian (or Arab)-Israeli conflict" - a term which assumes two parties equally desirous of conflict - when in fact what we have witnessed is a century-old Arab/Muslim war against the desire for a Jewish presence in the land of Israel/Palestine:

We now know that Arafat - a man who never had any authority to recognize a Jewish state - was never a serious partner for peace, and was in fact someone who had to unleash violence the more Israel wanted to make concessions for peace. He had to do this for two reasons: 1)However "secular", he had no authority in what has always been an Islamically-dominated culture (the secular, after all, is just another, less ritualized, form of the sacred) to acknowledge any right for any kind of Jewish political presence in land that Islam has previously conquered and ruled.  Arafat could play at making peace as long as this won his people useful concessions and foreign aid, but when it came to actually being asked to sign a deal that would recognize Israel, wrecking violence had to be unleashed as the only way out of a cultural impossibility.  2)In the Arab world view, those who sue for peace are seen to be weak and so deserve to be forced to submit.

None of this is to suggest that Israel doesn't have a moral responsibility to be always ready to negotiate and assist in various arrangements to facilitate Jewish life alongside Arab life, whenever the Arabs are serious about (in)formally recognizing the Jewish presence in Palestine.  But Palestinian culture is today one where endless and widespread antisemitic libels and hatred are expressed as normative, where no one "serious" can acknowledge Israel's right to exist.  For now, peace can only come as long as this Jew hatred is treated with the stony contempt and necessary force it deserves.  The forceful reality of the Jewish presence in the land of Israel must be asserted until it is accepted, if only silently.  One must not dream of final victories or final peace terms - there is only unnecessary violence in Utopian desires - but rather see that in fighting, step by step, for one's values and cultural presence, instead of showing fear and weakness, one engages the Other on a primitive level - the only realistic level in this case - and starts to create a reality, an order of shared existence that better recognizes powerful facts on the ground, and hence creates some degree of stability.

The guilty white Left: Making Excuses for those who would rape and enslave infidel activist women

UPDATE: Phyllis Chesler takes up this story.
Posted by truepeers at 1:39 p.m. 1 comment:

A light unto the nations 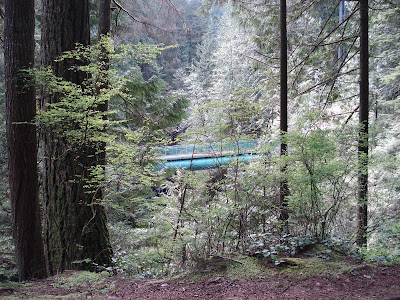 Numbers and words calculated to be of interest on a wet Monday evening...
50 millionaires: Roll Call publishes their annual list of the fifty richest members of Congress.
28 Democrats, 22 Republicans. Of the top ten wealthiest, 7 are Democrats, 3 are Republicans.
At over $188,000,000, John Kerry "... is the richest Member of Congress for the 13th time in the 15 years since his 1995 marriage to Teresa Heinz Kerry, widow of the late Sen. John Heinz (R-Pa.), the scion of the ketchup fortune."
60,000 words: 58 year-old John Basinger turned a regular workout routine on his treadmill into an opportunity to exercise his mind while exercising his body. After 3,000 hours spread out over nine years of running, he wound up memoring Milton's epic poem, Paradise Lost:

JB didn't use the mnemonic techniques favoured by memory champions, but neither, the researchers say, should we see his achievement as a 'demonstration of brute force, rote memorisation'. Rather it was clear that JB was 'deeply cognitively involved' in learning Milton's poem. JB explained:
'During the incessant repetition of Milton's words, I really began to listen to them, and every now and then as the whole poem began to take shape in my mind, an insight would come, an understanding, a delicious possibility. ... I think of the poem in various ways. As a cathedral I carry around in my mind, a place that I can enter and walk around at will. ... Whenever I finish a "Paradise Lost" performance I raise the poem and have it take a bow.'

23,000 religious prostitutes: The devadasi, an ancient Hindu tradition made illegal in India in 1988, serves as the subject of a documentary on one of the many forms of human trafficking still plaguing our long-suffering world:

Out of those she interviewed, nearly all cited economic need rather than religious tradition as the main reason behind their chosen path.
“Many devadasi are sold into the sex trade by their families,” she says. “The parents know that they’re not really giving their children to be religious servants, but they turn a blind eye.”
[...]
When the devadasi become older and can’t attract the same business, they end up trafficking, and taking girls from the small villages to big cities like Bangalore, where they set up brothels. Most of the girls chosen are illiterate agricultural workers, who go because they think they’ll make more money as devadasi than if they work on the land.”
Do any make their fortune? “A few can - a client might pay a few thousand pounds for a night with a virgin devadasi. But a lot of devadasi in their 30s or 40s are selling sex for about thirty or forty pence. The strange thing is that though they see themselves as superior to non-religious prostitutes - and even though they often dress to look different, with distinctive jewellery and clothes - I don’t think the clients see much difference.” 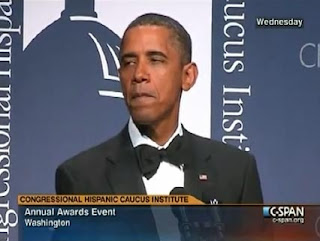 What a puzzle this man Obama can be.

While reading a speech to the Congressional Hispanic Caucus Institute last week, the President of the United States quotes the Declaration of Independance, but -- avoids? refuses? forgets? -- to include three seconds-worth of text... the image above captures the pose he wore as a visual ellipsis rather than admit that his fellow Americans hold these truths to be self-evident, that all men are created equal, that they are endowed BY THEIR CREATOR with certain unalienable Rights, that among these are Life, Liberty and the Pursuit of Happiness.

Is there nothing to the timing of this long pause? Did he simply lose his place while reading from the teleprompter? Or is there something about that particular part of the quote that Obama finds... troubling?

"No one Innocent" - Roberto Luongo

A friend of ours has a beef with the pathetically-named "immigrant rights" group, "No One is Illegal". NOI is defending the right of entry to Canada of illegal migrants, like the recent boatload of Tamils. But where would NOI draw the line? Their name is mindless Utopianism - for starters, how can we have unlimited "legal" migration in a world of welfare states with their costly benefits that are given to all legal residents as "rights"? And I'm sure that No One is Illegal is also for welfare states and their economic viability.

Anyway, I thought it was interesting that Roberto Luongo today wore a shirt with almost the opposite sentiment. Luongo announced today that he is giving up the Captaincy of the Vancouver Canucks hockey club - this after becoming the city's scapegoat (though not entirely without reason given his uneven performance in goal) for the team failing to go far in the Stanley Cup playoffs last year. Being a scapegoat of the group can teach you an important truth about our collective human nature - that there is nothing innocent in the collective, mimetic, process by which any group binds itself in opposition to what it singles out, more or less arbitrarily (but nonetheless meaningfully), to be in error.

Today Luongo went to the press conference with a shirt emblazoned "No one Innocent". 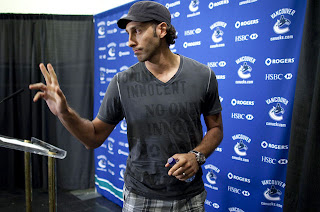 I salute your fashion sense, Roberto.
Posted by truepeers at 9:21 p.m. No comments:

Labels: No One is Illegal, Roberto Luongo, scapegoating

More evidence of relationship between Canadian state and Jewish covenant 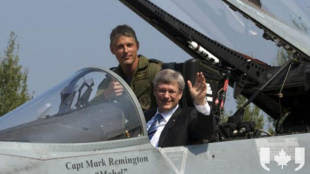 Watch this video and look for the name on the plane at the 12 second mark, in the lower lefthand corner. If anyone knows why Capt. Mark Remington has this name, please let us know...
Posted by truepeers at 12:29 a.m. No comments: