The decision on the Lorna Pardy, Guy Earle, Zesty's restaurant case before the British Columbia Human Rights Tribunal has just come down.  For links to early reactions and a copy of the decision see Blazing Cat Fur: Comic Guy Earle Fined 15K For Offending Heckling Dyke By BCHRT

Lorna Pardy has been awarded over 22 thousand dollars from Earle and the owner of Zesty's/Zawa restaurant. I have not yet had time to read the decision, but I will have more to say about this attack on all Canadians' freedom later. For now, just a few preliminary thoughts, based on my attendance at the hearing (as reported here - see reports in our March and April 2010 archives in this blog's sidebar. Yes, it has taken a whole year for the "human rights" tribunal to present its "justice").

My overall impression of the trial was that Lorna Pardy was genuinely hurt by the Earle-Pardy event, but that she and the culture in which she thinks of herself as a victim is much to blame for this injury.

Since I ultimately see this as an instance of human sacrifice, in which a "victim" has willingly (though with much instititutional encouragement) hurt herself for the cause of her society, let's begin with a few quick thoughts on the the human nature of events and sacrifice.

All human reality stems from events. It is how we act in, try to shape, and remember events that allows us to construct our shared cultural reality.  When an event happens, at the very moment it begins (though it's always carrying baggage from previous events) its meaning is up for grabs: it is not  a given in the nature of things that we must see any event one way or another. This is because what makes an event, what makes it stand out as noticeable in the flow of time, is its inherent unpredictability, its creation of some difference that we can't fully explain in terms of previous experience.  Because humans have freedom, we have events.

This uncertainty in all human experience of events is a humbling mystery, at least it should be for us. But most of us do not have the good faith to remain humbled. We generally want some guarantee that event X means what we might like it to mean.  (It's cold this year, that means the theory of global warming is.... he insulted me because he is an...)  All religion, ritual, and secular institutions try to provide some such guarantee.

In hunter-gatherer societies, people made animal offerings to the gods or spirit world in attempts to guarantee some meaning or outcome (the outcome was important not simply for pragmatic reasons but as a sign that would either sustain or threaten the group's shared understanding of the human and spirit worlds, and this understanding was the bond that kept one's group together).  When human societies moved beyond hunter-gatherer subsistence and developed, usually through agriculture, the potential for some bankable surplus of wealth, they became hierarchical as "big men" evolved to develop the capacity to control the ritual or institutional means by which this (potential) surplus could be accumulated, stored, and divided.  One aspect of the new ritual order witnessed in many places around the world was the proliferation of cults of human sacrifice. Often it was the big men themselves, the most esteemed figures, who ended up as the sacrificial victims.  Not only was the king the most obvious one to blame when things went wrong, when the gods were not smiling on the human community,  but over time resentment of his social difference, the big man's break with the primitive and more equalitarian world, and the inability of the big man, sooner or later, to mediate all the of the group's collected resentments, made him the most obvious figure for scapegoating.  This tendency to make victims of our most "worthy" has been well-documented at least since James George Frazer's groundbreaking ethnographic work, The Golden Bough.
Perhaps we still do it today.

But once a culture discovers the arts of human sacrifice and discovers that, in the context of a simple agrarian society that knows no other way, human sacrifice really does have some positive benefits in mediating (often irrational) resentments, in reducing group tensions, and sometimes controlling population growth that cannot be sustained by the prevailing economic methods, all kinds of people can become targeted as scapegoats.  And sometimes, or so I think we must conclude from the ability of some cultures, like the Aztecs, to organize regular festivals with thousands of victims, these were at least somewhat willing victims who went along with the ideas of their culture.

The West would come to renounce its pagan cults of human sacrifice under the influence of Judeo-Chritian religion and the secular "enlightened" modernity to which it later gave rise.

And, all too quickly, this brings us to the postmodern "human rights" worlview, now insititutionalized in Canada in various "Human Rights" Comissions and Tribunals.  To the proponents of the "human rights" worldview,  the postmodern culture continues in the tradition of redeeming victims and denouncing human sacrificial violence.  The vulgar "comedy" act of a Guy Earle thus becomes the target of a Human Rights Tribunal acting in the name of countering "homophobia" and redeeming one particular victim of Earle's verbal abuse.

However, those of us who have come to think that the postmodern "victimary" world view is not a genuine continuation of our most liberal traditions, do so because we have come to see that our present-day cult of "redeeming" victimhood  is actually one that positively needs to create victims and harms lives to do so, so that it will always have a "victim" to wave about as a guarantee of its own righteousness and institutional justification. In the victimary world view, every human relationship must ideally (at least in the thinking of today's academy)  be "deconstructed" to find the unequal or oppressive relationship inherent within.  This becomes an impossibly Utopian project of never accepting human reality, with all its asymmetries and differences, as anything other than the conpsiracy du jour of the supposedly powerful against the supposedly weak (I say supposedly, because we are already, in having this Utopian thought, beginning to turn the tables and letting the "victim" get something back from the "oppressor").

In the postmodern world, the differences by which any human order or society might be constructed - and social differences are always necessary to any conceivable society - are put under permanent suspicion.  Anyone who takes a historical lead in creating a difference is suspect. At its logical extreme, this means the left devolves into antisemitism and anti-Americanism and mindless apologetics for the violence of the supposedly "oppressed" third world, especially when that violence is targeted against the (once) historically exceptional West and its Judeo-Christian exemplars.  If you are a psychotic Hamashole intent on killing Jews, the Western left will hear your pain and rail against my unsympathetic language; if you are an Egyptian Copt, facing murder and assault form the local Islamic mob, probably not.

In the case of Guy Earle and Lorna Pardy, we must ask whether our culture and "human rights" institutions have positively encouraged Lorna Pardy to publicly present herself as a "victim" of Earle.  We can argue over the event - just what happened at Zesty restaurant's comedy night - all we want. But we are naive if we don't understand that even before the two parties went into the restaurant that evening their minds and conduct were already shaped by, and attempting to shape the next of, a countless series of events battling over the meaning of our postmodern "human rights" worldview.  It may be worth noting at this point that the hallways of the British Columbia Human Rights Tribunal featured (at the time of the hearing last year) a feminist poster championing a series of "great women" in the narrative of a certain redemptive "human rights" worldview.  This was not an institution trying to appear neutral but one that positively wanted Pardy to present herself as a victim, which she did in what I took to be a rather pitiable manner.

I think Pardy hurt herself (however many thousands of dollars she may receive in compensation will not be sufficient compensation) by publicly presenting herself, in the way she did, as a great victim of some idiot's bad words, as a victim who could not simply pay back Earle in his own currency. She has been widely belittled on the internet and in the media for seeking out the arms of the nanny state. And so I think that in the end she did, by her own actions, and with the help of our legal system, become a victim.  I think she is evidence for the argument that the "human rights" world view positively encourages and creates victims, and truly scars them. I think our "human rights" tribunals are often engaged in a cult of human sacrifice, having forgotten the best means to mediate the human desire for sacrificial violence lies in the codes of personal responsibility, and more decentralized mediation of differences, that once were central to Western culture.

Guy Earle's atrocious "humour" is itself, in my mind, a reaction to "political correctness". In a youth culture today where kids at school are taught to think in terms of identifying themselves or others as real or potential victims of power, and are taught little else in the way of human self-knowledge - everything is now reduced to victim/oppressor revelations -  it is not uncommon to see young people taunting each other with incredibly vulgar but puerile language, taunting to see who is willing or able to play "the victim".  And you're a "douchebag", etc. etc., if you disagree.

Now, before further comment, it's time to digest the decision that on its face seems outrageous, a chill on the freedom of our comedy scene and our freedom and financial ability to operate small businesses. I will be interested to see if it confirms my first impression is that this is the "human rights" regime just paying off a woman who served herself up as a very public victim to give the "human rights" institutions fodder for their suppression of freedom in the name of some impossibly Utopian project of deconstructing and redeeming each and every unequal human relationship.  It's time for the Canadian people to give back to the regime, the truly victimizing power, some of its own medicine. 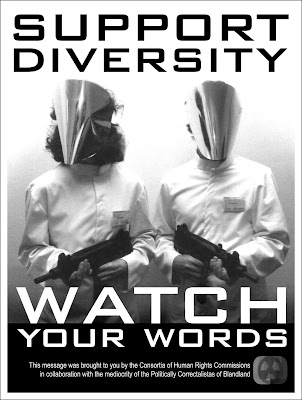 Wally Keeler
Posted by truepeers at 12:07 a.m. No comments: