I've now heard from all my Japanese friends, and thank God they and their families are safe. Five bits of good news, to weigh against the tide of bad news.

Looking at this "before-and-after" slideshow from the NY Times, it seems a miracle that anybody in that part of the country could have survived at all. (Click on the slider bar in the middle of each picture, and then drag the slider back and forth, like a curtain, to compare and contrast each image in the series)

It's as if a giant scythe swept across the face of the country, shaving the soil of its humanity, a ghastly harvest of death.
Posted by Charles Henry at 6:16 p.m. 4 comments: 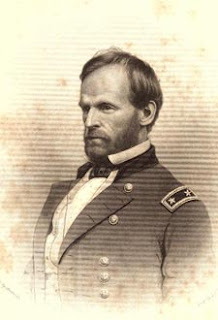 “[W]ar is war, and not popularity-seeking. If they want peace, they and their relatives must stop the war.”
__ General William Tecumseh Sherman

Controversial in his day, equally so in our own time, General William Tecumseh Sherman put quill pen to paper in the aftermath of the US Civil War to write an autobiography and chronicle his side of the story, in voluminous detail.

Thanks to the marvels of e-book technology his 1875 one thousand-page multi-volume memoirs can be carried effortlessly in a modern reader’s coat pocket. The technology may allow us to delete the file from an e-reader’s storage, but the stories Sherman relates are not so easily dismissed from the human reader’s memory.

Sherman can teach modern-day readers much about the people and the period in which their story took place, and through them, make us see something about our own time. His was a life of constant upheaval, of drama always lurking over the horizon. His recounting of the early days of the 1849 Gold Rush, which erupted during his California mission, were especially stimulating; hundreds of sailing ships would arrive with cargo and prospectors, but never leave, because all their crews would desert for the gold fields. Bank presidents and other wealthy managers of wealth found themselves starving and ill-clothed, as servant after imported servant would desert their households so routinely that their families had a hard time eating regular meals. The lure of gold proved so seductive that few people kept their word; trustworthyness became such a valuable commodity that those possessing the rare virtue sought each other out, formed business partnerships together (as well as doing each other's laundry..!), and made far more lasting fortunes than those dredged up by the get-rich-quick gold-seekers in their muddy rivers and fields.

Death is always close at hand in this book, even before the advent of the War Between The States. The deadly perils of mid-19th Century transportation, for example, are brought to light early on: while Sherman is west-bound to serve at his early post in California, he is shipwrecked twice in one day! No wonder everyone seemed to always do anything they did with such gusto.

The vengeful Union General, the scourge of the South, offered such generous terms of peace to the forces of General Johnston, the Confederate opponent who finally surrendered to him in April 1865, that many in the North charged that he who had marched so resolutely to the sea was now guilty of treason. Yet that same Union General had written a blunt letter in 1862, following the capture of Memphis, leaving no doubt the price he felt was necessary for peace:

“I will write plainly and slowly, because I know you have no time to listen to trifles. This is no trifle; when one nation is at war with another, all of the people of the one are enemies of the other: then the rules are plain and easy of understanding. Most unfortunately, the war in which we are now engaged has been complicated with the belief on the one hand that all on the other are not enemies. It would have been better if, at the outset, this mistake had not been made; and it is wrong longer to be misled by it. The Government of the United Statesmay now safely proceed on the proper rule that all in the south are enemies of all in the North; and not only are they unfriendly, but all who can procure arms now bear them as organized regiments, or as guerillas.”
__Sherman’s letter to Secretary of the Treasury Salmon P Chase

There were many stories that at once set my mind to wandering, and wondering; but none more so than Sherman’s casual meetings with his wartime opponents after the war, in social settings. "It's a small world", then as today. By chance he once found himself sharing a long train ride with former Confederate General Joe Johnston, the erstwhile defender of Atlanta, the forlorn protector of the Carolinas, the thorn in Sherman’s side for month after month of a year’s worth of gruesome fighting. What a meeting that must have been… how much suffering and misery had each conversationalist brought upon the other, just a few short years before; yet there they were, able to put such painful conflicts behind them, to find common ground for civil talk, despite their previous civil war.

It says a lot about the greatness of the United States of America, that such men were capable of such reconciliation, despite all that they had seen, and done. And lost. Today the drumbeat is sounded to never forgive, else victims lose their idealized status as heroes. Once upon a time, the heroes were those who could forgive, who allowed for atonement. Despite even losses as grievous as that of their own son.

Sherman has been accused of many vile deeds (his solution to how to clear a mine-filled road: have Confederate prisoners of war march ahead of his own troops, to set off the waiting mines), and he catalogs many of them in his memoirs, defending or deflecting where he feels necessary. There is one civilian casualty, however, whose death he never denied responsibility: the death of his favorite son, 'Willie' Sherman. A letter to a captain C.C. Smith is included in his memoirs, "as exhibiting our intense feeling" about the tragedy:

"Consistent with a sense of duty to my profession and office, I could not leave my post, and sent for the family to come to me in that fatal climate, and in that sickly period of the year, and behold the result! The child that bore my name, and in whose future I reposed with more confidence than I did in my own plan of life, now floats a mere corpse, seeking a grave in a distant land, with a weeping mother, brother and sisters, clustered about him. For myself, I ask no sympathy. On, on I must go, to meet a soldier's fate, or live to see our country rise superior to all factions, till its flag is adored and respected by ourselves and by all the powers of the earth.

But Willie was, or thought he was, a sergeant in the Thirteenth. I have seen his eye brighten, his heart beat, as he beheld the battalion under arms, and asked me if they were not real soldiers. Child as he was, he had the enthusiasm, the pure love of truth, honor and love of country, which should animate all soldiers.

God only knows why he should die this young. He is dead, but will not be forgotten till those who knew him in life have followed him to that same mysterious end.

Please convey to the battalion my heart-felt thanks, and assure each and
all that if in after-years they call on me or mine, and mention that they were of the Thirteenth Regulars when Willie was a sergeant, they will have a key to the affections of my family that will open all it has; that we will share with them our last blanket, our last crust! Your friend,
W.T. Sherman, Major-General

To see Sherman in today's cultural memory is to see a scowling face plotting some calculated cruelty, a furrowed brow framing a pair of merciless eyes. Reading his memoirs, reading about the loss of his son, I see these wartime portraits, much to my surprise, with new eyes.

William Tecumseh Sherman is no longer the brute I thought him to be; now I see a saddened father looking to shorten, not increase, the suffering of others, a man seeing others as fellow men, a soldier seeking to wage war as the necessary shortcut to winning a lasting peace.
Posted by Charles Henry at 9:14 p.m. 8 comments: