Last Friday, I wrote a post on a National Post story that reported that Iran would force religious minorities to wear distinguishing insignia. The Post soon after withdrew the story and now has published a statement (subscription only) that the story was false.

Some news services seem quick to mock the National Post for being both pro-Israel and quick to tar the Iranians (as if one could be too quick). Al Reuters writes:

The conservative National Post ran the story on its front page last Friday along with a large photo from 1944 which showed a Hungarian couple wearing the yellow stars that the Nazis forced Jews to sew to their clothing.

The story, which included tough anti-Iran comments from prominent Jewish groups, was picked up widely by Web sites and by other media.

But the National Post, a long-time supporter of Israel and critic of Tehran, admitted on Wednesday it had not checked the piece thoroughly enough before running it.

"It is now clear the story is not true," National Post editor-in-chief Douglas Kelly wrote in a long editorial on page 2. "We apologize for the mistake and for the consternation it has caused not just National Post readers, but the broader public who read the story."

Ha'aretz, however, gets to the heart of the matter:

The report emerged as false on Friday evening. Yes, the parliament in Tehran recently passed a law setting a dress code for all Iranians, requiring them to wear almost identical "standard Islamic garments" but it has never passed a decision to mark the country's Jewish citizens.

According to Iran expert Meir Javedanfar, Tehran has yet to fix the dress code for Muslims in the country, let alone for minority ethnic groups.

So you see, Iran, which now wants to portray itself as the victim of slanders from a western, Jewish-owned paper, only wants, for the time being, to make all Muslims wear the same uniform. What a nice idea that is, eh? and it still guarantees, does it not, that all Infidels will be identifiable in contrast to their Muslim compatriots? 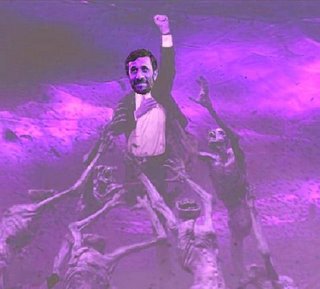 It's the nature of things that no one criticises an idiot for anything but that they all jump on the perfectionist for thse first error. At Jihadwatch where the daemon of hypergraphia, Hugh Fitzgerald floods the pages hourly with the most erudite and insightful copy on the Net he once made a typo, trnansposing Bernard Henri-Levi with some variation, bringing out the pedants like cockroaches to swarm all over his mistake. But the fact is that Hugh's point was entirely correct even if the information was literally backward.

There is nothing new or unexpected in the zunnar. All we got from the left and the dhimmi lap-dogs who run with them is a barking noise of hyper-correction that means nothing at all in real living. The Post's mote in nothing compared to the post in the Beemer's eye.

When the dhimmi laws of the Pact of Omar come to pass in Iran one might well expect that it will be "our fault" for raising the issue and forcing the Muslims to implement it anyway. It's all attitude and emotion. Reason is nothing in this struggle.