Fading Memories of World War I 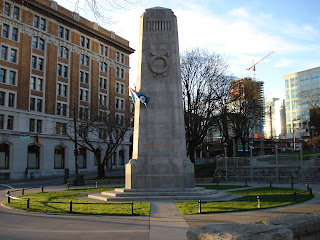 From 1914 to 1918 Canada fought alongside Great Britain and France in the Great War, the "War to End All Wars", World War I.

It won't be too much longer before we find ourselves remarking on the 100th anniversary of that conflict. It will be as far removed from us today, as Napoleon's bloodbaths were to those who fought through the same battlefields at the beginning of the 20th century, this more recent time against the Kaiser. 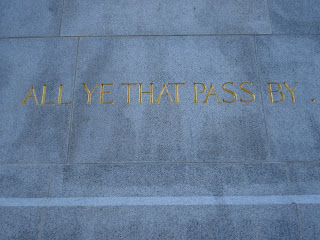 What does that distance in time mean for us as a nation? Might this terrible war be a good thing to forget? Might it be a relief, that we as a nation have been separated by enough history by now, that we glance at the monuments left in its shadow, and such places as Passchendaele , Vimy, Ypres (where Canadian troops suffered under warfare's first poison gas attack), that these resonate as little as Bleinheim or Agincourt? 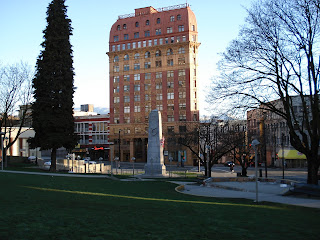 We know something important happened there, but it might seem to have happened to some other people... not to us. And so when we think of the the lives lost from World War I, the enormity of that loss could seem lessened... perhaps to the point where it is not much of a loss at all.

Shame on us, as a nation, on the day that we allow ourselves such a shallow memory, as well as its inevitable accomplice, ingratitude, and the nullity that would arise from that cultural amnesia. 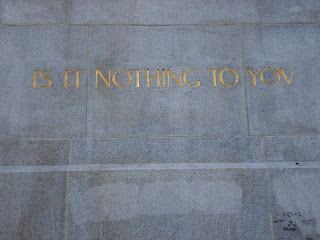 The folly and slaughter of the First World War will indeed mean nothing, and all the lives lost to that madness will truly have been sacrificed to no good result, if we let it mean nothing... if we allow ourselves the unearned luxury of forgetting the sacrifice ever happened.
Just as, on a more individual scale, we might squander opportunities to improve ourselves if we suffer and do not make a point of learning from experience. Whether we make a mistake that cripples us financially, or get worn down through seeing a loved one suffer from some fatal illness, there are many personal nightmares we may undergo that will defeat us unless we willingly, against all reason, choose victory.

That act is one we may choose at the end of any long hard day: we may stare at that fellow whose teeth we are brushing in the mirror, confess to them the secret shame our brute pride may not bear to utter more publicly, namely the long list of that day's mistakes proving we are less than perfect, thereby smaller men than we need ourselves to be. Such admissions risk demolishing us in the long run, if they are not met with the resolve to create some positive benefit to their existence.
We struggle to learn from our financial mistakes, and while things may never return to how they were before, they will at least not remain as perilous as they had become; finances will progress. The holes in our family will not be replaced, but their memory can still be treasured, and the value of that treasure may be passed along to a younger generation, needing the careful guidance of good role models if they are to also get through their own version of this same inevitable tragedy; family will progress. And above all, in a world where the Good are felt to suffer and Evil is seen to prosper, the determination not to let Good be forgotten, the perseverance to continue to fight to deliver the world from the Evil it is awash in, this most eternal of battles must not be abandoned, for then every past advance is rendered a forlorn stumble. Faith must progress.

If that raggedy gentleman we shave each morning in the mirror doesn't begin his day with the memory of the legacy they carry on their shoulders from the day before, what kind of purpose would they bring to their daily grind? What would there be to aim higher than? What past would we try to rise above? At the end of a long life, we might look back at all the losses accrued over that lifetime, but if we don't see a series of attempts to counter that suffering, and actions to surmount the challenges as they arose, what hell would hold more horrors than the weight of the regrets that would leave with us in our final waking moment of life? Amnesia carries no honor if it cheats us of the opportunity to pass along to others the hard luck lessons we so often learn the worst way possible.
This connection to our future, is the best validation of our past. Our connection to our past, is the best validation for our future. We might say, our past gives us our future, as we may measure ourselves against its shadow, and strive to outdistance it.

All these thoughts and more, crossed my mind today as I made my regular pilgrimmage to a certain site in downtown Vancouver, a trip I felt compelled to take after reading the following statement from Prime Minister Harper, on the death of one of Canada's last remaining World War I veterans, 107-year old Victor “Lloyd” Clemett. May his soul rest in Peace:

“Today, I learned of the death of Victor ‘Lloyd’ Clemett of Toronto, one of Canada’s last surviving veterans of the First World War. On behalf of all Canadians, I would like to extend my sincere condolences to Mr. Clemett’s family and friends. As a nation, we honour his service and mourn his passing.”

“Mr. Clemett was one of more than 650,000 Canadians who served in our military forces during the First World War. More than 69,000 of them made the ultimate sacrifice by giving their lives to protect freedom and democracy. Each year, on November 11, we remember these men and women, as well as the thousands of others who perished in Canada’s other military conflicts around the world.

“With the passing of Mr. Clemett, another link to Canada’s proud military history has been severed. All Canadians, no matter where they live, must continue to remember that the sacrifices of Mr. Clemett and his comrades helped shape strong, prosperous and democratic nation we enjoy today.