A sign-of-the-times story about fear and faith in today's France.

Translated from the short account carried in the French-language newspaper Le Figaro:

After vehement demands, a muslim obtained the removal of a crucifix hanging from the wall of the room of a Catholic clinic in Bourgoin-Jallieu (Isère) where his daughter was being treated…

Monday afternoon, at the Saint-Vincent de Paul clinic, the father of a young girl, who had just underwent scheduled preventative surgery, demanded that personnel unfasten a crucifix from his daughter’s room.
"For almost 15 minutes, the father, in the presence of his wife, verbally ranted, demanding that the crucifix be taken down", reported a witness. The establishment’s personnel eventually gave in to this demand.

The management of the clinic expressed their astonishment. The director of the clinic, Marie-Thérèse Besson, declared that this demand was "surprising [given that it’s] from a family that freely chose our establishment."

"When people choose to be treated in our establishment… they know that they are in a Catholic maternity hospital", she added.

I wonder, whose fear is the most palpable in this story; that of the hospital attendants, who can be so quick to accommodate their ranting customer?
Or the father who can allow himself to become so hot and bothered about seeing a Crucifix hanging in a Catholic hospital?

For what else is his fury based on, but fear?

Surely someone secure in their faith doesn’t behave as he behaves. If his faith is really the "real" one, then why would the presence of a simple icon defile him so deeply? Does he maintain so tenuous a grip on his religious beliefs that they can be this gravely threatened by a visual reminder of potential alternatives?

The story is a good example of how we are each an ambassador of our faith. A stranger to our faith will reasonably presume that our behavior is the result of our values taught by that faith, and any lack of civility is likely caused by, not incidental to, our religious beliefs. Look at what his behavior will make readers think now, of his fellow co-religionists.

And look what Catholic France is made to look like by the spineless capitulation of the hospital staff to the fear this ingrate father held for their faith. Don't the staff at that Catholic clinic believe in the healing power that the Cross represents?

If I get mud on my hands, I can probably wash it off. If I make a mistake, I can usually find, or be shown, some way to help atone for it. As a Catholic, I believe that if I sin, in word or in deed, there are circumstances under which my sin can be forgiven. I might fall away, but I can always be welcomed back by God. There must be something I can do, or something I can stop doing, that will help wash away the stain from my hands, and be clean again.

Should I conclude from this father’s un-reasonable behavior that his faith offers no such forgiveness for his stains? Does mere contact with the symbols of a rival faith cause a permanent, unwashable stain sufficient in power to anchor his soul to hell?

Judging by his behavior, he acts like it would. No wonder he was so scared of that Crucifix.

This father's ingratitude, insecurity and incivility is a timely reminder that good fruit does not fall from a bad tree, and that we should strive to think a second time about our actions, to ensure we are acting in accordance with our values, and our faith.

We can't expect others to be impressed by the reasonableness of our faith unless we act as if we are helped, not cursed, by that faith.

[Much thanks to the great French blog Le Salon Beige for unearthing this story.]
UPDATE: Esther at Islam in Europe has translated further details from the original report that appeared in the French paper Le Dauphine Libere. Apparently this isn't the first time that such incidents have taken place in these Catholic clinics... 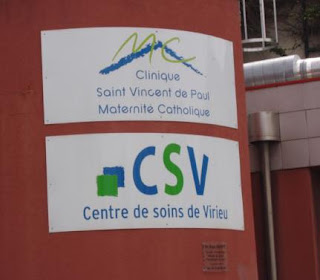 This photo shows the sign at the front entrance to the building. Clearly visible: the notice that it is a "CATHOLIC Maternity".

The Dauphine article provides clinic director Marie-Thérèse Besson's full comments, rather than just the excerpts quoted by the article I translated in Le Figaro: "When people choose to be treated in our establishment, they do so in full awareness of the facts. They know that they are in a Catholic maternity [hospital]. This is not at all hidden: it is actually clearly inscribed at the entrance to the facility, as well as in the reception leaflet. The nuns of Catholic maternities perform their duties in religious garb, the bell, visible from the rooms, tolls three times at each birth. This demand [to take down the Cross] is surprising coming from a family that had freely chosen our establishment."
"Each room contains a Crucifix. Of small size, it is in no way ostentatious, [it's] very modest."

I don't know if I entirely agree with you when you say the father must have felt "fear." I think what he felt was outrage at the sight of the emblem of another religion. Muslims in Europe, in France, expect to be treated as if they were in their native land; they do not expect, nor do they in any way respect, signs of Western civilization. They reject the culture and religions of the West. Once they have implanted themselves in a Western country that country becomes part of dar al-Islam.

The answer to the father should have been NO. We are a Catholic Hospital.

And what is a decent young girl doing in a maternity hospital in the first place? I bet you she gave birth out of wedlock.

I recommend that this clinic posts a sign which says:

This is a catholic clinic and in this clinic we respect Christ and His sacred cross. No crosses will be removed from our rooms, whatever the demands are.Amen.