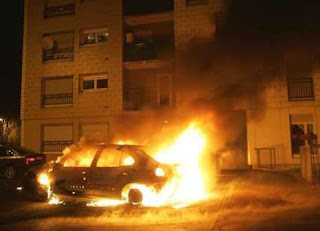 Welcome to 2009: Over a thousand cars were set ablaze by French urban "youth" this past New Year's Eve, a 30% increase over last year's fiery festival.

France's President Nicholas Sarkozy vows that, in the near future, such vandalism will result in the perpetrators losing their right to a driver's license, at least not until the victim of their vandalism has been compensated for the loss of their automobile, through insurance or otherwise.
Over 30,000 police and 50,000 firefighters were deployed on New Year's Eve; 288 arrests were made, compared to 259 the previous year; four "lightly wounded" police and fire officials, which repeats the same number of injuries from last year; fights with police were said to be "sporadic" and "rare".
Minister of the Interior Michèle Alliot-Marie congratulated her troops' professionalism, which allowed for a "calm [evening] without notable incidents." [my translation]
Tell that to the team of police investigating a routine traffic accident in the violence-plagued banlieu of Seine-Saint-Denis; at 2:00 AM a car being driven by three young thugs deliberately tried to run over the helpless police officers. The kids said later that they assumed the police were in fact manning a checkpoint. A rare detail: the police took out their guns in self-defense and opened fire on the car as it tried to hit them. The three youths, aged 15-16, were pursued and eventually caught.
UPDATE: More details on France's New Year's evil here.
Posted by Charles Henry at 3:50 p.m.

I think we'll witness eventually a battle between Berserkers on the one side and jihadis and their sick-in-the head Left dhimmi fascist cheerleades on the other. As in most wars, most middling people will run and hide and await the new master.