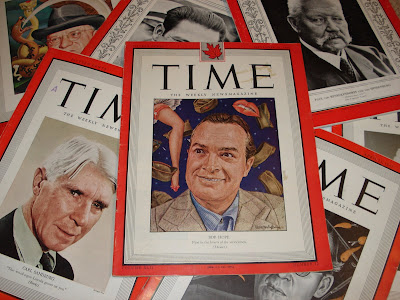 "For fighting men, this grimmest of wars is in one small way also the gayest. Never before have the folks who entertain the boys been so numerous or so notable; never have they worked so hard, traveled so far, risked so much.”

So Time Magazine begins its 2-page story from September 1943, as it chronicled the summer tour that saw Hollywood comedian Bob Hope entertaining the Allied troops fighting in Sicily as well as those serving across North Africa.

This Sunday we continue our weekly Radio Memories series with a post that takes us back to a radio broadcast originally aired on October 11, 1943. Entitled simply "Bob Hope Reports", it dramatizes the remarkable story-behind-the-story of that busy summer.

The episode is from an amazing series called The Cavalcade Of America, a radio program offering historical drama which had its own rather dramatic behind-the-scenes story; COA was the creation of its beleaguered sponsor, the Du Pont company, who had been undergoing a morale problem of their own as a result of charges of possible war profiteering from armaments manufactured back during the First World War.

Starting in 1935, with this series a major part of its new public face, the company took major steps to repair the negative public image as munitions-making “merchants of death" that dogged it during the anti-big business era of the New Deal. Cavalcade began each episode with the new Du Pont slogan, “Better Things For Better Living… Through Chemistry”, before launching into an adaptation of morale-boosting stories from American history.

During WWII the focus shifted towards the war effort, and going through Cavalcade’s wartime broadcasts, from 1942 through ’45, makes for fascinating listening today… one really gets the sense of how global in scope that conflict became, as their stories swing from, oh, the Aleutian Islands one week, to the jungles of Burma the next, to submarine patrol in the Atlantic, to the Phillipines… and to this week’s offering, following Bob Hope’s morale-boosting tour of the then-recent battlefields of Algeria and Sicily.

Of the hundred or so wartime Cavalcade Of America shows I've heard over my years of listening to old radio drama, this particular episode has stayed with me, and remains a personal favorite. I think it contains an effective example of how to boost one's own morale, through trying times: look for ways to be of service.

Hear It Now: Coming Home From The Korean War

Rogers Of The Gazette: Rewinding The Town Clock