Trivia time! Who said the following: “Science fiction is that field of literature which deals with human response to advances in science or technology.” 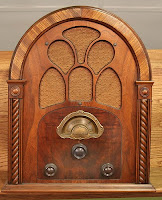 The answer can be heard below, secreted within this week’s Radio Memories.

Every Sunday we recharge our sense of wonder by tuning in to the days before television, a time when listeners orchestrated a world within their imagination, through listening to the lost art of radio drama… the theater of the mind.

The imaginative medium of radio drama did not outlive the arrival of the visual medium of television, a competitor which ironically left very little to the imagination. The twilight of dramatic radio saw much creativity and experimentation, a final act celebrating all that made the older medium different from the technological upstart that displaced it in the hearts and homes of families across North America.

As interest in television grew, interest dwindled in preserving the past accomplishments of the medium it displaced. Therefore much of radio’s early artistic legacy was consumed in self-destructive cleansings of closets, cupboards and backroom shelves, program archives forsaken by the networks that were now looking to the idiot box for their futures, and fortunes.

This week’s offering is from the 1955-58 series Biography In Sound. It tantalizes us to imagine the cultural treasures we have probably lost, and how close we came to losing far more than we did.

Our episode today was originally broadcast back on Tuesday December 4th, 1956, and is entitled “A Ticket To The Moon”.

Biography In Sound was not, strictly speaking, radio drama. It was instead, as suggested by the series’ title, a weekly biography undertaken on a particular person or, less frequently, a particular subject. This episode engages listeners in a stimulating biography of science-fiction, through such tour guides as prolific authors Isaac Asimov and Ray Bradbury, pioneering publisher (and author in his own right) John W. Campbell, filmmaker George Pal, scientists like Willy Ley, and shaper of fandom Forrest J. Ackerman.

Their ideas on the distinctions between science fiction and fantasy, how they saw science-fiction influencing their time, and their predictions on where that influence might lead us, make for fascinating, thought-provoking listening to our modern ears today.

“Our language… you might say our language lacks a word. We have the word ‘impossible’, but we need to differentiate between two sorts of things. The impossible is that which, by definition, can never be done. We need another word: unpossible, that which can’t be done just yet. At the present time it is unpossible to buy a ticket to Mars. That does not mean that it is impossible; eventually that can be done.”

While many episodes of Biography In Sound have survived (for our previous visit with this remarkable series, go here, to listen to their inspiring program devoted to theatrical legend George M. Cohan), there are nevertheless quite a few holes in the series multi-year run.

What insights, observations, revelations, did we lose, in those missing episodes... and in the uncountable hours of radio programming in general that has been consigned to oblivion?

What treasures are we taking for granted today, that are destined to be lost in their turn? Destined, perhaps, due to a lack of imagination, a lessening in our ability to wonder about the future, and the unpossible...

For a list of our 2009 Radio Memories listings, go here.