French Minister: "We Won't Tell You How Many Cars Get Burned Tonight" 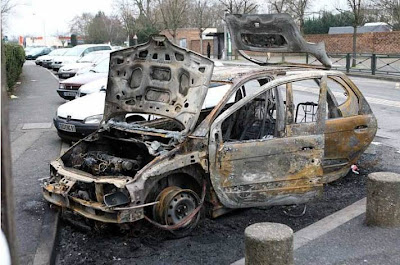 Some French celebrants will honor their Fête Nationale by attending veterans parades and fireworks displays.
Others tend to pursue less noble traditions: 35,000 extra police are being mobilized throughout the country in the hopes of subduing France's notorious generation of uncivilized youth, a show of force to prevent the expected spike in the number of nightly car burnings which, sadly, now haunts the annual French holiday.
Trouble has already begun: the night of July 13th, the eve of the national holiday, the police brought charges against 306 arrested young arsonists and thugs, compared to 190 at this time the year before.
One statistic, however, will apparently escape us this year, according to Brice Hortefeux, France's Minister of the Interior: he officially declared today that there will be no official figures released on the number of cars set ablaze throughout the country on France's Bastille Day:

"[...] no numbers for burned cars will be released for the nights of July 13 and 14, in order to put an end to this unhealthy tradition which promotes, every year at this same time, these criminal acts."

"Instructions have been issued to police headquarters so that they too will not release the number of cars burned in their départements. Hereafter, only annual reports will be made public."

French commentors cynically recommend that the French government adopt this approach to reporting on unemployment statistics and health figures as well, if hiding from the truth can prove such an effective remedy for dealing with their beleaguered nation's social nightmare.
[A tip of the Phrygian cap to the French blog Le Salon Beige]
One of the more pleasant results that has come from years of blogging about this unpleasant mess in France, has been the many inspiring emails, heartening comments (and even face-to-face meetings) we have received from our French readers in France. It's easy to lose sight of the full scope of the truth that there is such a thing as a French Heartland, there are many good and decent people there deserving of support, encouragement and appreciation... deserving a respite from the incessant French-bashing that North American blogs tend to engage in.

We read that the Lord was willing to spare Sodom and Gomorrah if there could be found as few as 50 good people there; well, there's a much higher number than that in France today, so why not put aside the inevitable English-French fraternal spite, and on this day more than most, continue to pray for those within this overwhelmed minority, determined to love family, honor honest labor and engage in social civility despite the surrounding amorality that attempts to seduce them from these values; to pray that they may withstand the folly of their confreres; and that their steadfastness in the face of so much adversity may one day result in a renewal of national spirit, leading to the emergence of a nation more worthy of them.
Posted by Charles Henry at 6:15 a.m.

Thanks Charles-Henry!
Eventually, they had to tell us roughly how many cars were burnt ; they sounded very proud because apparently there were fewer than last year ; pitiful, isn't it?
But the cars were of no importance really, as in the fireworks night (13-14 th july), something was thrown up into a flat ; it started a fire ; a 63 year-old woman was so badly burnt that she died two days ago.
On saturday evening, some "youth" stole a luxury car, did what they wanted to do (more robbery I guess), and then left the car in a pine forest after setting it on fire ; it was a very hot and windy evening, the night prevented using canadairs...acres have been burnt, 2000 people were evacuated from the campsite they had chosen for a family holiday...
It is often said that some realtors must be pleased, since now the gfround is free for building....
Apparently, our "guests" have decided to use fire to destroy the country.

Thank you for thinking of those of us who are ready to fight and get their land back ; many, but not enough yet I am afraid ; because, you see, decent people often cannot understand the nature of the threat ; they can't imagine that other countries, and inside traitors, have introduced "cuckoos" in their once comfortable nest. "cuckoos", that is the right word for those "youth" of North African, or African, descent. They invade, they eat, they take all resources, bring nothing, and destroy, defile, rape and kill....

I have decided to live up to our proverb : "aide-toi, le ciel t'aidera!" ; I know that what is going to happen is not justice ; it is rather revenge for some ; as for me, I'll try to remain moderately on the level of self-defense...But, if it becomes necessary to go farther, I will.
Zazie