The bad joke that is "justice" in the Netherlands

Yesterday, Geert Wilders declared to the Dutch court that is trying Wilders for "racism" against Muslims - on the grounds that Wilders has compared the Koran to Hitler's Mein Kampf (in the context of questioning the balanced or reasonable application of a law that bans publication of the Nazi book) - that he will not answer any questions from the court, that he will invoke his right not to say things that may be held against him in what promises to be a politicized game of gotcha (my interpretation). Here, via Diana West, is Wilders' statement translated into English:

Mister Chairman, members of the Court,

Thank you for allowing me a few minutes for a personal observation. For me the past months have been centred around the exhausting process of government coalition formation. For the people at the negotiating table the end of the day meant that they could rest and recharge their batteries. For me it usually meant that I had to devote my time to a second job, namely being the object of this ongoing court case.

It is strange experience for me to have to combine these two cases. However different these cases are they are the results of the same ideal, namely to stand for the freedom of expression and the will to pass on a better Netherlands to the next generation.

In this regard, defending freedom of expression (and for me that is what is at stake in the coming weeks) is of crucial importance. More then ever we must honour this commitment. Democracy requires open and free discussion. It must be possible to express different vision, especially on controversial issues, because the clash opinions leads to better understanding..

I am here today as a suspect. Formally, I am being tried, but it is the freedom of expression of many Dutchmen that is being tried.

Freedom of expression may not be curbed. That is all I have to say.

My lawyer will speak on my behalf regarding all the rest. I invoke my right to remain silent. I do so on the advice of my lawyer, but also because I have already said everything that needs to be said. I do not retract any of it. This does not mean, however, that I have said all the things which have been attributed to me.

And how did the court respond to Wilders' statement? The head judge, Jan Moorse, said:

I still value it to say something about it, Mr. Wilders. The court has read the files, but the court also read newspapers and watches television these days. You have been accused by others of being good at stating a position but unwilling to debate it. It looks as if you’re doing the same thing today.

In other words, the court responded to Wilders' statement that he would exercise his right not to say anything that might be seen as incriminating, by accusing Wilders on the spot that his failure adequately to debate his accusers is a sign of Wilders' guilt. The power of the accuser, the scandal monger, is somehow equated with what is right and just.

This is a sign of a totalitarian "justice" system of course. Reminds one of China's cultural revolution, for example.

Naturally enough, Wilders' lawyer then asked for an independent finding that the presently-constituted court is biased against Wilders. The wrakings kamer, the special court that is held to consider such claims of bias then found that

There is no substantial evidence to show that the judges have given the impression of being biased, therefore the request is being denied

Talk about being blind to the obvious. But then again, maybe not. It turns out that the head of the wrakings kamer is himself politically active with a government-funded organization focussed on "development" aid for Morocco, a judge with a previous record of downplaying terrorism. It seems that it is normal for judges in the Netherlands to be affiliated with a ruling political party.

While it should go without saying that any government that puts on trial a leading oppposition politician for mere words, for advocating policies that run counter to the highest pieties of the governing "liberal" elite, is in no sense liberal and only proving that contemporary "liberalism" reaches its logical conclusion in totalitarianism, it is nonetheless jarring to this writer to see additional evidence of the decadence of Dutch society and justice. Many Canadians, only a generation or two ago, died liberating the Netherlands from the Nazis. And, we may now well ask, for what?

Let us remember how, after liberation, the Dutch treated some of those who had collaborated with the Nazis, marking them visibly. 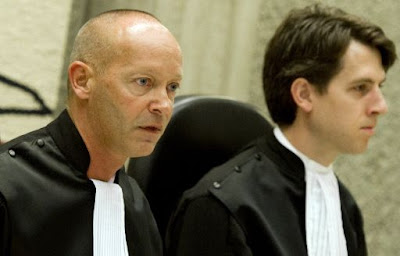 Madness has again descended on Europe.
Posted by truepeers at 1:00 p.m.