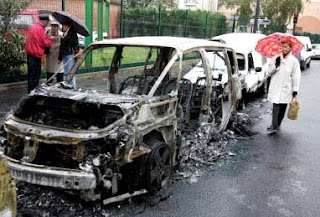 "I took the decision to put an end to the contests, to the honor rolls, and to no longer talk about the number of burned vehicles."

In July Minister Hortefeux implied that the "unhealthy tradition" of keeping citizens informed on the progress (or lack thereof) of policing this fiery vandalism, was only promoting more attacks, inspiring the feral youth toward a thuggish game of one-upmanship.
Now, to rain on their parade, January news accounts will contain no specific accountings of how many automobiles are to be flambées on New Year's Eve: only numbers for the year as a whole will be released.
Posted by Charles Henry at 8:26 p.m.

I begin to think I might have what I would call an "unhealthy sense of humour."

And to Truepeers, David, and our legion of happy fans.

More to come in the new year.