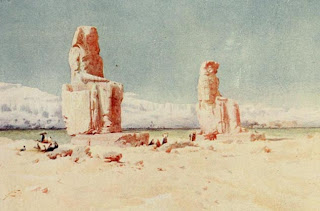 As we watch and wait for any signs of a hopeful outcome to the news from Egypt, here's a story that was shared with me this morning, with an angle that probably won't make the headlines any time soon...:

A friend of mine plays in one of those "real-time" internet games where each player faces off against other human players from around the world, rather than against a computer. Not everyone may be aware of this newer trend in online games, so permit me the following basic description: The gameplay involves each player managing medieval-styled villages scattered across a virtual landscape, inter-acting with neighboring players' villages, either through peaceful trade or strategic conquest. There are shifting alliances of players/villages that compete or co-exist, with the whole saga playing out in "real-time", rather than in "turn-based" gameplay, like chess; if you stop playing this game for a while, your neighbors can't help but notice, and that influences how they choose to co-exist with you...

When Egypt unplugged itself from the internet a few days ago, one of the minor results was an online assault upon self-identified Egyptian players' villages, as they stood suddenly helpless before online looters. You see, players have the option to include some biographical information about themselves, as part of their player profile, much as we bloggers have the option to "reveal" ourselves through our blog profiles. Players are usually circumspect about their identities, although my friend reports that gamers claiming to be from the Middle East are rarely shy about declaring where they live and who they are, when compared to the rest of the average players of these games.

In recent weeks, current events have been tipping off the players in this online world as to which specific villages/players are not likely to be able to defend themselves if attacked, because of the real-world difficulties happening in their real-life homeland. When Egypt disconnected itself from the internet, it left all their players' online communities unsupervised... and therefore, unprotected.

The online response in the game has been two-fold; on the one hand, a few charitable players have banded together to try and co-manage, and ultimately defend, these properties on behalf of their real owners, knowing as they do the real reason behind the sudden silence of their Egyptian absentee landlords. The game mechanics apparently allow for certain mutual assistance to take place without the actual owner of a village being online to supervise the transaction; consequently, several sympathetic players here and there had taken the initiative to shield their colleagues' virtual possessions during their enforced absence, in the hope that soon enough there can be more of a level playing field once again.

Unfortunately the far more common response has been the systematic looting of Egyptian players' virtual villages by rapacious competitors, who see these real-world events as a golden opportunity for easy pickings.

My friend shared a message she received this morning from an Egyptian player of her acquaintance, back online today after an understandably long absence. He thanked her for her recent help, as well as requesting their team's continued support for keeping his online virtual possessions safe and secure until he can become more involved again himself.

Now, putting aside the obvious point ("Why in the world do you still care about this online fantasyland when your real world, filled with real friends and family, is in such peril??"), isn't it interesting how human behavior in the real world is spontaneously repeating itself in this online, parallel, reality?

In real-world Egypt, some citizens are banding together for mutual protection from looters, while others see the tumultuous times as occasion for pillage and plunder. And here it is occuring again, in imaginary worlds. There are countless games like hers nowadays; is the story repeating itself in all of them, I wonder? 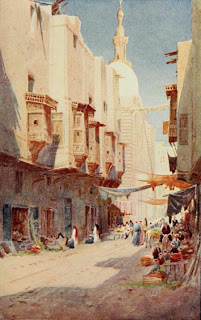 nice.. I will spread it where I can.