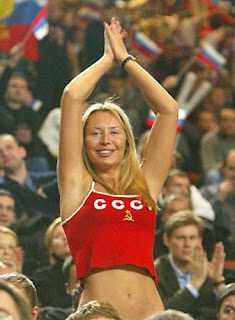 It seems that North American schools aren't the only ones turning out reprehensively ignorant students. This report from Yahoo News suggests that Swedish kids are, if at all possible, even more dangerously stupid:

A majority of Swedish teenagers don't know what communism is and don't know which countries neighbour their own, a poll published Wednesday showed, raising questions about Sweden's education system.

Ninety percent of teens aged 15 to 20 don't know which foreign capital is closest to Stockholm, 90 percent don't know what the Gulag is, and 40 percent think communism has increased prosperity in the world.
"They have a lack of understanding for basic concepts such as dictatorships and democracy, and that is unsettling. There must be a major change in their level of knowledge, and schools in particular must take responsibility," Camilla Andersson, the head of the Information About Communism organisation that commissioned the study, told Swedish news agency TT.
...
[Schools Minister Jan Bjoerklund] said he planned to propose more history lessons for students, and would recommend that the Holocaust and crimes committed in the name of communism in the Soviet Union be mandatory elements of the history curriculum.
The results of the study, published in daily Dagens Nyheter on Wednesday, also showed that 50 percent of the 1,004 teens questioned didn't know that Berlin was the capital of a country bordering the Baltic Sea, 82 percent didn't think Belarus was a dictatorship and 43 percent said they thought communism had claimed fewer than a million victims in the 20th century.
Fifty-six percent said they didn't know if Western market economies were democratic societies, and 22 percent said communism was a democratic social structure.

Maybe my initial sense of outrage is misplaced; for all I know, these are "good" students, who might well be successfully parroting the information fed to them by their professors, eager to brainwash a new generation in the left's latest attempt to "practice communism correctly", unlike those misguided and mis-informed 20th century marxists like Stalin, Pol Pot, Mao, Fidel Castro, Lenin, Krushnev, and Every Single Other One Of Them.
Posted by Charles Henry at 10:48 p.m.

Charles Henry,
Some people might just sneer..I am not one of them ! The Swedish Minister of Education (so pompous a title!) frightens me : he wants more history lessons...What history ? Do the Swedes know who was at the beginning of their royal family ? Surely not ! If you listen to "Education Authorities", the history of Europe began circa 1914..All that had taken place before WWI must have been "vapourized", I suppose.
You have surely understood that I am very angry at those people who have turned schools into kindergartens ; schools were supposed to bring knowledge ; nowadays, they are brain-washing enterprises...

Zazie, you make a great point: "what history", indeed!

I am always meeting young people who are quick to recount all the bad that the western nations have done over the years, but this "knowledge" is never balanced by all the good accomplished as well. And all the bad perpetrated by the enemies of the west are ignored entirely.
I think a few lessons on the fate of the kulaks or an assignment to read the Gulag Archipelago would put western Europe's history into a far different perspective for these young people. If we're "bad", what does that make the soviets..?

I'm posting a link to this article. Do you want to correct the spelling of "Sweedish"?

Ooops!
How embarassing... thanks for pointing that out.

...and Time was trying to sell Swedish educational ideas, like telling six-year-olds about sexuality, as superior to American standards (ten-year-olds) in a recent issue. Those leftists want to keep us dumb.

Still, those kids don't seem too dumb to me. Although most of my leftist friends (the vast majority) begrudgingly admit Marxism doesn't work, they still want it, or at least heavy, heavy socialism. And I'm sure that many of my friends only would know that Ottawa, Canada is our closest foreign capital because they went drinking within the bounds of our northern neighbor a few times.

Communism IS a democratic social structure. Modern China shows that having a mixed economy, even with actual Communists in control, can work. However, even they have this dictatorship that gives Communism a bad name.

Sorry, I think you are deluding yourself. How is Communism something democratic? By its very nature it requires an elite to dictate terms so that people cannot exercise their freedom to create inequalities that would seem inegalitarian.

I know that the official line is that Communism is something great and egalitarian. But that line is part of a Gnostic ideology that has little grasp of reality.

"By its very nature it requires an elite to dictate terms so that people cannot exercise their freedom to create inequalities that would seem inegalitarian." Communism establishes a Soviet republic. A Soviet republic a is a political system whose legislative power is ruled by a web of soviets or people's councils: this is, direct democracy.

All public charges in true socialism can be annulled all the time.

The collectivized economy is, also, pure democracy. All means of production belong to the society beyond the soviets.

Rethink if you think is communism is not democratic and, for fuck's sake, READ.