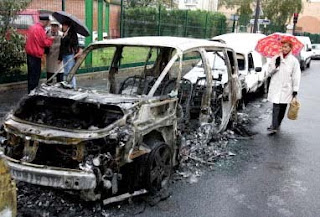 Back in 1999, France was rocked by the scandal brought to their attention by then-President Jacques Chirac, blasting his political rival, then-Prime Minister Lionel Jospin's government in a speech delivered at a firefighters conference: a shameful 14,000 cars were burned by youthful vandals in 1998 (the previous year), with a shocking 100 vehicles burnt on New Year's Eve alone.

This week the French newspaper Le Figaro contrasts those halcyon days with more recent incendiary statistics:
1998: 14,000 cars burned
2005: 45,588 cars burned
2006: 44,157 cars burned
2007: 46,814 cars burned
2008: 40,496 cars burned
2009: the expected final number will again exceed 40,000
Fast forward to January 2010 and current Minister of the Interior Brice Hortefeux's patting himself on the back for a "calm" New Year's Eve: only 1,137 cars set on fire, a 0.87% decrease over the previous year. (As a sardonic French commentor points out: at this rate it would take 115 years for there to be zero cars burned on New Year's Eve... ) Le Figaro puts those numbers in perspective, citing the Ministry's own figures as their source:
2004 New Year's Eve: 324 cars burned
2005 New Year's Eve: 337 cars burned
2006 New Year's Eve: 425 cars burned
2007 New Year's Eve: 397 cars burned
2008 New Year's Eve: 878 cars burned
Two factors are cited for the slight drop this year: minimal television coverage, with French tv "sober if not silent on the subject". Next, an "exceptional police presence": 45,000 police and riot squad officers mobilized for the night of December 31 2009, and 34,000 called out for the night of July 14th (Bastille Day in France), said by police unions as operating at "near maximum capacity".
Le Figaro editorializes that "the experience of the last few years shows that arson has become a banal tool for protests, of rage but also of joy. All the important events involving youth are now at risk: New Year's Eve, but also the nights of July 13 and 14 (when 500 cars were burned), soccer games (at least 300 cars burned in France as fall-out of the Egypt-Algeria match), important elections (730 cars burned the night of Nicolas Sarkozy's electoral victory in 2007). A unique phenomenon in Europe..."
... for now.
[Translated from the original French source at Le Figaro; thanks to Le Salon Beige for the story, where a commentor there remarks that these official figures do not count the vehicles that end up burning by being parked next to cars set on fire. That is a statistical detail left out of most of the english media's reporting on the story. As we reported way back in our January 2008 coverage of that year's inflammatory car burning figures, France keeps two separate sets of statistics for their auto-da-fe; as far as it's known, Dec 31st's 1,347 figure only includes the cars targeted by vandals for burning, it excludes the vehicles that caught on fire due to flames spreading to adjacent automobiles.]
UPDATE: France-watcher Tiberge carries a couple of posts at her blog this week that will be of interest to readers looking for more news on the subject of France's fiery New Year's Eve: translations of reader comments from the French mainstream media's reporting of the ritualistic arson, and a review of the unprecedented security procedures put in place that were necessary to reduce the total by only ten burned cars.
Posted by Charles Henry at 11:00 p.m.

If you assume there are a lot of old cars and estimate the cost at 10-15 thousand dollars per car, which i think would be conservative if you include the costs of firefighting, police, clean up, insurance, etc., this is costing France at least half a billion dollars a year, or roughly ten bucks for every Frenchman. Replacement cost for new cars would be considerably higher. That's a noticeable economic hit on a national basis, and of course for the individual owners. Maybe France should correlate car burnings to cuts in welfare cheques, or tax rates, on a neighborhood by neighborhood basis. Then people might start reporting their neighbors.

Cars in France cost more than here. People make a lot less money there too.
Families are being affected in a big way.

the use of old cars is France is high that's why the burn rate is cars is high over..government of France should look after this issue and try some thing to reduce it ...

Its a loss to the owner.

Ohh very sad to see that.

This is generally a wonderful website i should say,I enjoyed reading your articles. This is truly a great read for me. I have bookmarked it and really amazing and impressive website design.

In Europe there is a hidden war between lions without teeth and hungry chaotic hyenas. Hyenas have come to lion territory without any resistance. What happens next? Do lions regrow their teeth? or die?