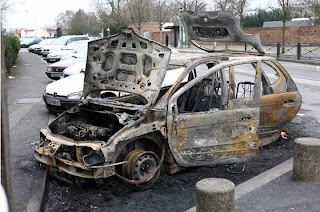 French government officials are patting themselves on the back this morning for a job well done: the number of cars burned on New Year's Eve dropped from last year's record total. An unprecedented national deployment of 45,000 police and riot squad troops, supported by 50,000 firefighters, succeeded in reducing the number... by ten.

On the night of December 31/January 1st, 2009, 1,147 cars were set aflame. Last night, "only" 1,137 were torched (according to early reports released this morning to the press). France's Minister of the Interior, Brice Hortefeux, states today that the "calm" New Year's Eve "went well overall throughout the whole national territory".

The increased police presence is cited as a major contribution to the "light drop" in incidents of assaults on police, firefighters and old-fashioned Parisiens, who simply want to pop champagne corks rather than molotov cocktails on their New Year's Eve. "You'd think we were at war", observes a father who had come to the Champs Elysees to celebrate 2010's arrival with his family, in the face of the cohorts of police patrolling the capital city. Estimates are that only half the number of people chose to venture out and celebrate the New Year on the streets of Paris, compared to the year before.

Paris' notorious trio of troubled suburbs, Seine-Saint-Denis, Hauts-de-Seine and Val de Marne, saw a reduction in the number of car burnings in "seriously more important proportions", the Minister reported: only 198 torched automobiles, a 20% drop over last year's total. 138 arrests were made in the 'sensitive' suburbs, compared to only 41 the previous New Year's Eve.

One of the big stories connected with last year's New Year's evil was the spread of the car burning rituals from urban to rural settings, but so far the French media does not report an increase of that trend this time around. "Just like an ordinary weekend", the Bordeaux police announce this morning.

The average French citizen hardly finds the news accounts reassuring. A comment by "Hadrien" made on Le Monde's coverage of the car burnings serves as a good summary of the comments in general, a response in direct opposition to the gallic shrug of the shoulders being exhibited by French authorities:

"It's not the number of burnt cars that worries me. It's the fact that everyone finds this normal..."