Praying For The Victims Of The Arizona Massacre 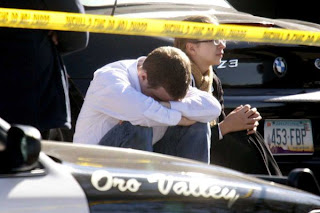 Praying today for many people in the aftermath of yesterday's senseless carnage in Arizona, but especially for the family of that poor 9-year old girl who died at the hospital. Her uncle describes her as "real special and real sweet":

"The next thing you know this happened. How do you prepare for something like this. My little niece got killed-took one on the chest and she is dead," Segalini said outside the girl's house."

Pray for her parents who now have the shadow of two tragedies over their life... for, as we learned yesterday, young Christina-Taylor Green was born on September 11, 2001:

Christina-Taylor had just been elected to the student council at Mesa Verde Elementary School and had been interested in politics from a young age, her father, John Green, said Saturday night.
"She was a good speaker. I could have easily seen her as a politician," her father said.
The brown-eyed athletic girl had one sibling, an 11-year-old brother named Dallas, and the two loved to go swimming together.
[...] "She kept up with everyone, she was a strong girl, a very good athlete and a strong swimmer," said her mother, Roxanna Green. "She was interested in everything. She got a guitar for Christmas so her next thing was learning to play guitar."
[...] Christina-Taylor also enjoyed singing in a church choir at St. Odilia's Catholic Church, where she had received her first Holy Communion in the spring.
Already aware of inequalities in the world around her, Christina-Taylor often repeated the same phrase to her mother:
"We are so blessed. We have the best life."
[...] "She was born back east and Sept. 11 affected everyone there, and Christina-Taylor was always very aware of it. She was very patriotic and wearing red, white and blue was really special to her," her mother said.

Pray for her well-intentioned neighbor, who must be beside himself with guilt; knowing of her interest in politics, the neighbor invited little Christina-Taylor along with him to see Congresswoman Giffords' "Congress On Your Corner" event at the local Safeway. Pray for her neighbor's family, as he was shot four times during the rampage, and is now recovering in hospital.

Prayers of gratitude are in order for the three brave souls who stopped the crazed gunman from murdering even more victims in the attack. On a day when the news is filled with villainy, thank God we may also learn of acts of such heroism:

Sheriff Clarence Dupnik also said three people, included one of the shooting victims, jumped to action, preventing the attack from being worse.
Although he didn’t identify the heroes, he said when the shooter ran out of bullets and attempted to reload a magazine into the gun, a woman grabbed the magazine and “tore it away from him.”
“She was trying to get the gun away from them,” Dupnik said.
Then as the shooter sought to load yet another magazine into the Glock 9 millimeter pistol, the spring in the magazine failed. The magazine holds 31 bullets.
At that point two men were able to tear the gun away.

The family of another hero that day, need prayers of a special kind. 76 year-old retired construction worker Dorwin Stoddard was waiting in line with his wife to meet Congresswoman Giffords when the massacre began. Stoddard instinctively tried to shield his wife, and was shot in the head. He fell onto his wife, who ended up only being shot three times in the legs. His sacrifice spared his wife's life, as CNN reports that the bullets were removed and she is expected to make a full recovery.

Pray for the families of the other murdered victims: 76-year-old Dorothy Morris, 79-year-old Phyllis Scheck, congressional aide Gabe Zimmerman, who was engaged to be married, and Chief Judge John Roll of the U.S. District Court for Arizona, who was stopping off on his way home from church to say hello to his friend, Congresswoman Giffords.

And pray for the family of Gabrielle Giffords; may they, and all those whose lives were changed yesterday, some day come to know peace.