Blue Revolution - Still in the Days of Wine & Roses 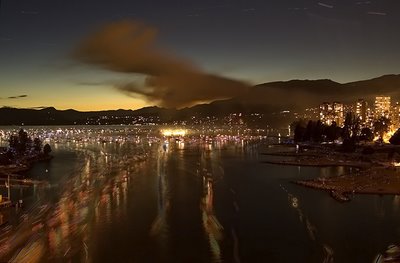 I have not done much blogging here this week (so thanks to Charles for taking us over the hump of our 100th post!). One part of the reason is that I spent the time I had laid aside the last couple of days to argue with a young man who doesn't believe in truth (see here and here. This young man apparently believes in a Canada where everything will go alright if only we all believe in peace, sing John Lennon's "Imagine" and just get along by respecting everyone's ideas without ever taking any idea more seriously than another.

It seems to me, this man is the fruit of multiculturalism. But as I say to him, there is such a thing as truth in political life and we need to ask what will happen when we forego belief in it in order to affirm every position as equal. There is truth in political life because we need politics in order to create order and justice; the free market alone is not enough for it does not provide the means for us to represent and defend together, and to defend each other, in our common faith in freedom - to defend our freedom against the resentment it inevitably engenders.

The discovery through political life of new symbols or language, and the institutionalization of this language, are the means to represent our need for order, freedom and justice; and this all requires a faith in our ability to discover, through our political discussion, higher truths than those that once bonded our community. Old truths, while still necessary to the community, are not quite sufficient to meet the changing needs of our times.

But if we give up the quest for the truth that will further define all of us as Canadians - if we start reducing Canada to multicultural and relativist pieties like leading Liberal, Michael Ignatieff in Tuesday's Globe and Mail - then we will discover that people in need of order and justice will increasingly leave those political arenas where truth is not pursued, in order to find it elsewhere, fracturing our nation perhaps beyond repair.

We are a country of peace-makers, especially because we are also a country of immigrants, many of whom have come to Canada to escape the horrors of conflict. As a nation of immigrants from the zones of war, we have a special vocation for peace, and it is by exercising this vocation that we maintain our unity as a people. We have a voice that other countries listen to. Let us use it.

Well, my forebears fled conflict to come to Canada and while I certainly think that mediating conflict with a minimum of violence is a good thing, I'd never make my bottom line definition of Canada "a nation of immigrants" that thus puts neutrality ahead of the defense of freedom and what is right. Canada has a distinct culture of its own - with its own particular ideas of what is good and true - one for which many have fought and died. We lost four soldiers today in Afghanistan. Peace is no ultimate good if it can only be had by submission to terrorists and their crazy religious or Gnostic ideology. Every free nation today needs to act as a security for the other free nations, including Israel. Otherwise, why should any one nation alone take the risk of engaging strongly in their local battles within the larger worldwide war against a religious terrorism that dreams of converting the world, and against the states, notably Iran, that sponsor terrorists and that threaten us all with a nuclear war (if the apocalyptic Mullahs of Iran get the bomb).

We stand together or we will fall alone in time. But to stand together with nations with whom we don't always agree, we need leaders who are willing to articulate and defend the cause of freedom, even if sometimes that takes us to choose sides in a war. We do not need Ignatieff's wishy-washy relativism and his intentionally ambiguous claim that we find our unity in working for peace. What would he make of the fact that one in ten Canadians put on the uniform in World War II and fought for peace? When is war necessary and isn't stopping the insane Mullahs of Iran from obtaining nuclear weapons worth a lot of war? If so, Israel must be our ally, not another tool in our self-denying construction of a Gnostic identity as "the nation of immigrants, the nation of peace".

Just as many parents today want to withdraw from the public school system, we can imagine a day when Canadians withdraw from their national political life and splinter into competing "tribes" fighting over the remnants of a nation that became an empire that tried to represent everything under the sun and thus lost its own principles of coherence, and then became a bureaucratic beast that was slaughtered when all the cults it housed had no more faith in any unifying truth or authority.

We at Covenant Zone are leading the fight against that day. We realize that we can no longer rely on the old and now decrepit cultural elites (in academe, the media, etc.) to define this country and its politcal life. For many reasons, the nation and its culture has had to decentralize itself, in the name of freedom, and indeed respect for our social diversity. High culture has given way to popular culture. It is left to all ordinary people who are able to take a lead in representing and defending the new centre(s) of Canadian national life to do so.

We wish to renew the Canadian covenant and we want you to join us. We meet every Thursday in Vancouver in the atrium of the main branch of the Vancouver Public Library, 7-9 pm, to plot what we call the Blue Revolution, after the French patriots who are fighting for their nation (see Charles' latest post here.) in face of a nihilist empire of anti-national multiculturalism that only leads to more and more bureaucracy and conflicts among the cults that bureaucracy and its rules alone cannot control .

We are not in search of a Covenant that excludes any Canadian; rather, we want to include all in a new and shared search for the truth. We seek again the unity that must be primary to any social diversity. I hope to write more about these themes soon. In the meantime, if you are in Vancouver, come join us; if you are elsewhere, write us.
Posted by truepeers at 7:56 p.m.