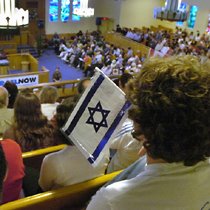 Spent some time this evening comparing local press coverage of yesterday’s pro-Israel rally held at the Schara Tzedeck synagogue here in Vancouver. Interesting to see what was covered by the media… and what was not.

First, the Vancouver Sun newspaper, which makes no mention of the presence of Ed Fast, the Conservative Member of Parliamant in attendance [and not the local MP, which I should have specified in my own report last night], and the overwhelming standing ovation caused by the initial mention of Prime Minister Stephen Harper’s principled stand with Israel at the start of the event.
Also unmentioned was the stirring report on some recent Ethiopian immigrants to Israel, whose introduction to western civilization was to come under direct attack by hizbollah rockets. (which I myself neglected to refer to in my own personal report, here)
The Sun's report makes sure to dutifully quote from the speeches affirming people’s duty to defend themselves when attacked, I notice, probably because of how aggressive it makes the participants sound.

"Israel has no choice but to defend itself," said Morris Soronow, 61, who attended the Stand with Israel solidarity rally at the Schara Tzedeck Synagogue on Oak Street.

He said the violence in Seattle worried him briefly, but "none of that would ever stop anybody from coming out to support Israel."

And apparently it did not. Many families attended with small children, while both young and old arrived with friends, filling the synagogue's main hall and two overflow rooms in the basement. Inside, those in attendance said prayers for Israel and its army.

Among the speakers who addressed the crowd was Rabbi Philip Bregman, chairman of the Rabbinical Association of Vancouver, who likened Israel's attack on Hezbollah to chemotherapy.

"You cannot stop until the cancer is eliminated," he said.

They also heard from Jason Murray of the Canada-Israel Committee, who asked people to express their support for Israel to the government and media, and from Craig Diamond of Combined Jewish Appeal, who requested donations for emergency relief services and rebuilding in regions of Israel under attack by Hezbollah.
…
Four police officers and private security personnel provided security and the event ended uneventfully, despite earlier concerns that prompted organizers to increase the amount of security after Friday's shootings in Seattle.

[I notice that every piece I read about the event suggested a different number of attendees. An understandable conflict of numbers, I suppose, since the spillover crowd were directed to adjoining halls... the varying totals probably leave out one room or another]

Very interesting to compare to the report offered by the Vancouver Province, the city’s other main newspaper; their headline, Give to Israel, backers say, highlights the appeals made for more than just words in support of Israel’s cause. (The article also makes reference to a muslim rally held downtown, but I’m editing that out for brevity’s sake; the theme of my post is comparing coverage of the pro-Israel rally) 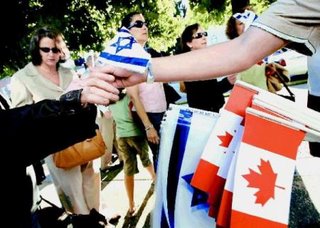 Unlike the Sun's account, the one in the Province draws attention to the warm reception granted to both Prime Minister Harper as well as the attending MP from Abbotsford, BC… an eyebrows-raising incident you wouldn’t know about, if you only read about the rally in the Sun.

Vancouver's Jewish community was asked to donate to Israel last night at a synagogue as Lebanese supporters staged a rally several kilometres away.
"It is an hour of very great need in Israel," said Craig Diamond of the Combined Jewish Appeal. "It will take hundreds of millions of dollars to rebuild the community."
Diamond said almost $2 million has already been raised. "We are sticking to our $6.8-million goal this year. In addition, we are asking for one-time gifts for emergency relief and reconstruction."

More than 1,200 Jewish supporters gathered at the Schara Tzedeck synagogue on Oak Street under conspicuous protection from Vancouver police and hired security guards. The synagogue is one of the oldest and largest in the Lower Mainland, where the Jewish population is said to number about 25,000.
…..
Jason Murray of the Canada Israel committee said terrorism by Hezbollah in Lebanon -- which has been firing 100 rockets a day into Israel -- is a threat to western democracies such as Canada.

"Terrorists threaten our way of life," he said. The meeting was told that about 1.7 million Israelis and Lebanese have been displaced by the shellfire, bombs and rockets. Prime Minister Stephen Harper received a standing ovation when his name was mentioned for his unreserved support of Israel.

The ovation was repeated when Abbotsford MP Ed Fast -- who addressed the crowd -- called on those attending to "bless Canada."
.....
[Here’s a sneaky way to lessen the impact of Israel’s suffering from the hizbollah beasts: “The meeting was told that about 1.7 million Israelis and Lebanese have been displaced by the shellfire, bombs and rockets....” Sure, we were told that, but in two separate accounts: we were told of the several hundred thousand lebanese displaced, and the more than one million Israeli citizens being displaced. By lumping both figures into one, it minimizes the suffering on the Israeli side.]

And finally, for comedy relief more than anything, one of the free local papers, the Metro, which focuses exclusively on Rabbi Bregman's chemotherapy comment. Personally I thought the main focus of his speech was on the valiant sacrifice and courage under fire of the IDF, and putting a human face on the painful conflict going on over there. I had sincerely forgotten the chemotherapy detail until being reminded of it this morning in the execrable Metro account. It was hardly the main point of the evening’s speeches… unless your agenda is to discredit the righteousness of Israel’s defense of its people.

A further small detail about the Metro's report: the photo on the paper’s front page seems taken before the rally started, while the place was filling up, because it shows many empty seats… by the time the event got underway, the room was filled to capacity, with an overflow crowd kept in adjacent rooms, following the event through a video feed. The photo caption doesn’t specify when it was taken, before, during, or after, the photo was taken. I say: before, when it was still pretty empty. I stress the point because, for myself, the visual of seeing so many, many people, sharing the same concerns and supporting the same cause, was very affecting; this photo does not do the event justice.
Much like the rest of the reporting....

Why was Ed Fast eyebrows raising? Does it suggest to you some kind of evangelical alliance with Israel? I know nothing about him, but Abbotsford is known as the Bible belt...

I read the Sun report this morning and thought it went out of its way to give equal time to Muslim voices and, considering it was a front page story, I thought it was much too short a story, though I guess the reporter must have had a tight deadline. I wondered about that chemotherapy quote too.

But all in all I'm moved that you had such a moving evening, Charles. I'm sorry I missed it.

"Why was Ed Fast eyebrows raising?"

Oh, I guess I wasn't clear; sorry about that. I meant to say that it was the **response to Stephen Harper** that was eyebrow-raising, by the heartfelt outburst of gratitude and appreciation. It was not a planned ovation, it noticeably caught the speaker off-guard, as his opening remarks were not designed to leave room for applause at that point in the speech.
Maybe only my eyebrows were doing the raising... :)
I wasn't expecting it anymore than the emcee.

"...considering it was a front page story, I thought it was much too short a story, though I guess the reporter must have had a tight deadline..."

The event was only an hour long, we were out of there by eight-thirty... if they can have lengthy reports from hockey games in the morning paper, I don't see why they couldn't have included more details about this story... if they had wanted to.

The Metro is worth every penny of its cover price - and not a penny more!