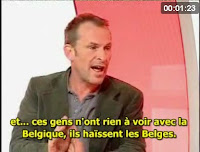 In the wake of the over-the-top police and state response to the 9-11 anti-islamist rally in Brussels last week, I thought this interview would put that violence into context.

Dutch journalist Arthur Van Amerongen has been interviewed both in Knack magazine [translated into english here by Esther at Islam in Europe] and more recently on Belgian television, concerning his upcoming book, "Brussels Eurabia", sounding for all the world like an appropriate companion volume to Fabrice de Pierrebourg's "Montrealistan".

The interview has been translated from Dutch to French by bloggers Pistache and Gedeon, and now from French into English by myself. I'd appreciate any corrections or clarifications to ensure it can be as accuate as possible. I haven't had time to do the entire interview, but this is a significant portion of it. The second half can be read here.

Host: The book “Brussels Eurabia” from Dutch journalist Arthur Van Amerongen will be in bookstores in a few weeks. The book talks about the muslim community of Brussels, and promises to be stunning and mesmerizing, if we are to believe our colleagues at Knack. To write this book, Van Amerongen infiltrated the muslim community in Brussels for one year. (0:36)
…
Arthur, you write in your book: “Brussels is a timebomb, there will certainly be an attack.” Isn’t this a little exaggerated? (0:47)

Arthur Van Amerongen : No, listen, it’s an enumeration; look at what happened in England: doctors orginally from India or Pakistan who commit an attempt… if you look at what has happened in 7 years: the Trabelsi affair, the attack on the Philips building… all foiled by your intelligence services. If we only look at the reports, I am certain that [an attack] will happen. (1:10)
Host: For you these are the clues that this will happen?
Arthur Van Amerongen : No, no no. I infiltrated the muslim community of Molenbeek and Marolles for one year. These folks want nothing to do with Belgium, they hate the Belgians. (1:24)
Host: What do you base that on?
Arthur Van Amerongen : I was among them, I speak arabic. They hate the Belgians, they have nothing to do with Belgians, nothing, nothing. (1:32)
Host: But can you… are you talking about the moroccan community, the entire Brussels muslim community?
Arthur Van Amerongen: No, the moroccans with their beards, their half pants and their bare feet in their shoes… no, it is a very dangerous community. It’s a time bomb. (1:47)
Host: A time bomb. But… you write this in your book as well. Aren’t you fostering a culture of fear? (1:51)
Arthur Van Amerongen: It’s reality. It’s not a culture of fear. Belgians are much too occupied with B-H-V, Bruxelles-Halle-Vilvoorde. You should be concentrating on the 25% muslims living in Brussels. The danger comes from there. You are pre-occupied by your linguistic quarrels. … The moroccans are more dangerous than the Walloons. (2:12)
Host: Yes, but… okay, you say “the muslim 25%” in Brussels… Are they all dangerous? Come on. (2:20)
Arthur Van Amerongen: No, but if 1% of them are dangerous, you are up the creek… (2:22)

Arthur Van Amerongen: They want a caliphate; quite simply they want a government that directs the umma from Bagdad to England. (3:08) It’s what they want. (3:10)
Host: These people are therefore free… free to do what they want here? (3:13)
Arthur Van Amerongen: That, you should report to the police. I mean… Go take a walk through the bookstores at Lemonnier… Look at the hate pouring out of there, against the jews, against the christians, against the shias… It’s there freely for sale, in french and in arabic. Euh, sorry! All this is possible in Belgium… One can also easily purchase arms…
Host: Let’s go back a bit, [buying] arms is another story. Let’s go back to the muslim community. You were able to infiltrate yourself into it. Was that easy to do? (3:38)
Arthur Van Amerongen: No, very difficult, I didn’t get to drink [alcohol] for 8 months, and I appreciate a short beer time to time…
Host: Yes. But how did you get the idea to infiltrate, to dive into the muslim world? (3:49) 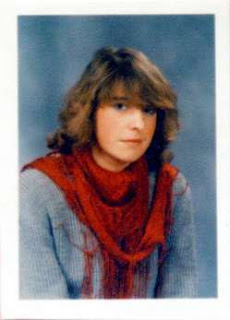 Arthur Van Amerongen: Because Muriel Delgauque, who comes from Charleroi, went and blew herself up…

Host: You speak of this woman who blew herself up, who committed a suicide-attack in Iraq. This is what triggered in your head, what decided you to want to do something, try to understand? (4:18)

Arthur Van Amerongen: Yes, I then said to myself: “How is it that a girl from Charleroi had gotten to such a point where she decided to go to Bagdad with her crummy car and blow herself up? It’s absurd. (4:27) This girl drank, with her friends, she did drugs, she smoked joints… (4:31)
Host: Did you find the answer to your question?

The interview can be seen and heard at http://lvb.net/item/5653