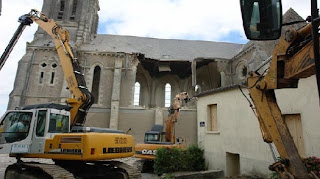 A sad fulfilment of the saying, “use it or lose it”: small-town bureaucrats are proposing to tear down many old French parish churches, as cost-saving measures for their communities. These venerable buildings are sometimes in need of expensive repair, and the ever-decreasing size of their congregations are making it difficult for French city burghers to justify allocating equally dwindling city revenues towards preserving their historic churches. 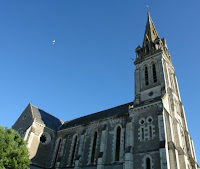 And so some municipalities, for instance that of Maine et Loire, have reconciled their decisions to bulldoze 19th century churches, as a cost-cutting measures for their euro-conscious community.
Back in August 2006 they rolled up their sleeves to demolish the church of Saint-Georges des Gardes, freeing themselves from the long shadow of its weighty obligations... in more ways than one.

Here in Canada, we would call such acts "demolitions", but in France the current term is “deconstruction”. It makes it all sound so much more civilized..! (Photos at above left and at the top of the post represent a before-and-after view of the "deconstructed" church.)
For a sad chronicle of this and other successful "deconstructions", readers are refered to the excellent reporting done by La Tribune de l’art . In the article I've linked to, “The New Vandals”, you can see the degree of imagination, ingenuity and resourcefulness necessary for tearing down architectural splendours such as the church of Saint-Georges des Gardes and the Chateau de la Trésorerie in Hardinguen.

The drama is set to play out yet again, in the small community of Valanjou. Only this time the citizens are trying their best to stop it: [translated by me from the original french; we welcome any clarifications or corrections]

It is not certain that the work will begin before the municipal elections in March 2008, but the mayor of Valanjou (Maine-et-Loire) is determined: the steeple and the bells of the church of Saint-Martin-de-Joué will be destroyed.
By sixteen votes to one, the municipal council decided as much in the spring. “We have three churches for 2,000 citizens; for the year, the average maintenance of a church rises to 12,000 euros. City hall doesn’t have the means to finance the reclamation works”, noted [mayor] Bernard Briodeau.

…
“I understand the symbolic responsibility of this place: my own children were baptized there! But let’s stop talking [about] patrimony”, he says. “The departement consists of more than 300 churches of this type. In Saint-Martin, only the foundation dates to the XV century and it was never a question for us to destroy that part of it!” The destruction to the tall portions of the church will cost “about 280,000 euros”. The mayor is in search of subsidies. …

[French catholic blogger Michel Janva notices a detail glossed over by the Le Monde journalist: by the mayor’s own figures, the cost for the demolition is equal to the cost of maintaining the church for the next twenty-three years..! Back to the article...]

“For several years, one can see that the destruction of a church is no longer a taboo subject”, notes Alain Guinberteau, founder of the website 40,000 clochers [Note: this is a **fantastic** site, “40,000 belltowers”, with many beautiful photos of gorgeous buildings throughout France, all making me ache to visit them], who is undertaking a photographic census of French churches.
...
“The destruction of churches is an epiphenomenona”, confirms a member of the episcopate. “Their future depends on the manner in which the catholic presence can be acknowledged in our society”, thinks Mgr Claude Dagans…

There is a struggle underway to find the means to keep the majestic church of Saint-Martin de Joué alive. Concerned citizens of Valanjou have created a website as a rallying point for their cause, from which we hear of a slightly different take than the story reported in the Le Monde article:

For several years, the municipality’s project to demolish the church of Saint-Martin de Joué (essentially for reasons of security, financial and lack of cultural interest) has roused the opposition of some of the inhabitants of Valanjou, concerned about preserving their religious, historical and cultural heritage.
The meeting of 27 april 2007, organized by the mayoralty, showed its resolution to eliminate the Saint-Martin church. His honor the mayor had described two projects: a complete restoration of the church, for approx 1,500,000 euroes, a project that no one was demanding, such a restoration seeming futile; the partial deconstruction of the church, in order to only preserve the principal tower, for approx 993,000 euros, a project supported by his honor the mayor. This project permanently distorts the church and deprives Valanjou of a part of its heritage.

Is there a solution, or is France fated to continue to bulldoze its churches, burying its past under a mound of cheap rubble, to make room for... what, in its place?
Photographer Alain Guinberteau, this time writing at the website Clochers En Peril: est-il trop tard? (Belltowers In Danger: is it too late?) searches for a pragmatic, albeit depressing, solution to the challenge.

Cultural heritage is expensive, whereas a place of worship may take place anywhere, even in a building in the style of a hall with a cross on the roof. So what to do? In the face of the isolation of Mayors with too small budgets for these big churches, the mayors are more victims than perpetrators of the “deconstruction” as they like to call it. Therefore the greatest number of people possible must be informed about the “demolition” of our religious cultural heritage and maybe omit the word “religion” so that it only contains “cultural heritage” in order to have all the people feel concerned.…

Must it come to that? Is twenty-first century France, in de-constructing its faith in its past, also doing the same for its future?
I turn back to M. Guinberteau for his chilling last words on the matter, as the last bells toll for many of France's historic churches:

These churches are the witnesses to our architectural past and, until now, only wars destroyed our churches; therefore are we at war? 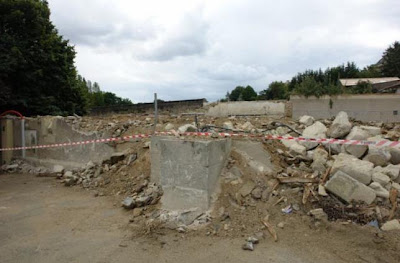