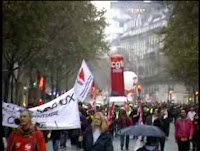 "No one can go on being a rebel too long without turning into an autocrat."
__ Lawrence Durrell

Leftist tempers flared at a November 20th union march last week in France, captured on video by the courageous crusaders for freedom at La Baf ("Brigade de l'Argent Francaise") .
Check out the video of the unnerving incident, below (or here at the La Baf site). 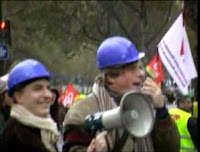 The two quixotic counter-protesters sport winsome smiles as they tease the phalanx of marching strikers with slogans like "time to get back to work". 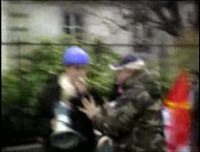 Suddenly the scene takes an ugly turn for the worse, as you'll see around the 00:56 mark in the video; unionists don't seem to have much of a sense of humor, and lose their sense of proportion even quicker than they lose their temper. 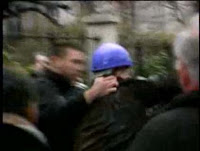 The union marchers push at first, but that's not enough to get the counter-protester pair silenced, so rough shoving is soon accompanied by smacks of increasing violence, eventually knocking one of the gutsy pair of French jokers to the ground.
There's your "solidarity" right there, served in a knuckle sandwich by the totalitarian left.
Tell me again which is the side of diversity, tolerance and peace. 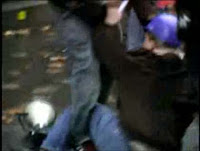 La CGT montre sa capacité à dialoguer
Uploaded by Labaf
(These brave blue-helmeted fellows are from the same team that dared face down the anti-mohammed cartoon protests way back in February 2006; you may recall that famous video seen around the world, where a pair taking a stand for freedom of expression (maybe the exact same two guys..?) were wisked off by French secret police, as the latter expected the intrepid pair of counter-demonstrators to be lynched by the furious mob. You should watch that video as well, if you haven't yet seen it...)
Posted by Charles Henry at 7:22 p.m.