New riots in a new France 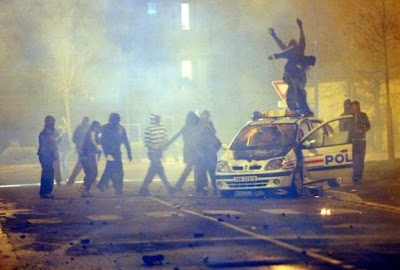 The incessant, day-to-day car burnings and spontaneous assaults that have plagued France over the last two years have taken more sinister shape in recent days, as I'm sure everyone knows if they get their news from new media internet and talk-radio sources in addition to old media television and newspapers.

Citizen journalists are on the scene this time, far more than was the case during the previous rioting; now a whole parallel world of reporting is going on, in venues like youtube and dailymotion, and blogs like bafweb and Francois deSouche. The France of 2005/06 was not as wired as the France of today; let's see what difference this might make, as the French news consumers plug in to alternative sources of information to fill out their understanding of why they've lost their car and why they have the sting of smoke in their eyes.
Mainstream media outlets like Le Figaro and France Info may still hold title as the first stop for news, but do they remain **the only** source, as they once might have been?
I think we can expect a very different response to the riots this time. Not a universal, nation-wide condemnation yet, but far less sympathy for the "downtrodden youth" than was the case during Chirac's France.
The French seem to be waking up.

(thanks to Francois DeSouche for the videos)


26/11 emeute villiers le bel
Uploaded by hunterix
UPDATE: another reason for having hope in a New France: "French youngsters are Europe's top bloggers"
UPDATE II: It turns out that one of the youths killed in the collision with the police car, in the accident that "started" this whole new wave of rioting, was a blogger.
Posted by Charles Henry at 7:45 a.m.

Thanx for quoting Fdesouche.com, you'll find here news about riots which are not available on mainstream medias.

We've just launched a new version in English too. Post your comments and do not hesitate to link us!

French patriot,
I didn't realize there was an english version as well..! You guys are thorough.

If you are involved with the fdesouche blog, I want to thank you for your efforts!
It is so important for the English West to see that not everyone in France is the cowardly-croissant-eating lefty caricature that all too often gets portrayed in the conservative blogosphere.
France does have a heartland, just like North America, it has decent hard-working people trying to raise families with traditional values, just like in North America.
They have an even harder time of it, than we do over here, and it doesn't help, I'm sure, when all they here from our side of the pond is a hearty "the French deserve everything that's happening to them"....

The language barriers have led to mis-understandings and under-estimations of how much there remains in common, despite the differences.

Anything that can be done to bring allies together, is important, so thank you for your contribution at your great blog.