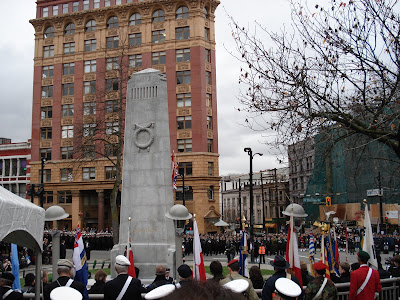 A little rain and a lot of cold did little to dampen the spirits of those in attandance at the 2007 Vancouver Remembrance Day ceremony held once again at the Cenotaph. This view above is the vantage point from which I observed the event this year. 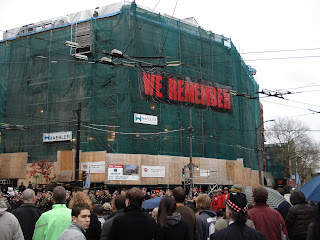 The construction site across from the park paid their respects to the veterans, serving troops as well as members of the police and firefighters as they parade past the memorial. 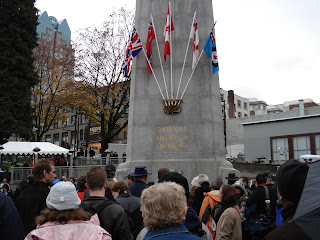 Following the event, comes the unofficial custom of citizens solemnly paying their individual respects over the various wreaths laid around the base of the Cenotaph during the ceremony itself. 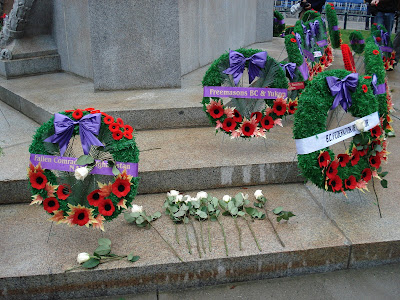 World War II veterans in attendance filed past the wreaths and paid their respects to our troops fallen in Afghanistan, each leaving a flower, as pictured above. One particular older gentleman, his hands and body shaking with the tremors of age, nonetheless steadied himself for a rigid and determined salute as he laid his tribute within the wreath at left, and that's when the tears started flowing for me. God Bless these people, and Godspeed to their families. 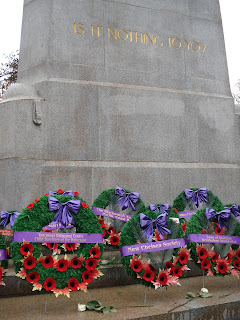 I don't know if this is customary in other parts of the country, or even in other parts of our province, but here the tradition is to leave your poppy affixed to a wreath which has special meaning or connection for the observer. Mine gets left in memory of the child survivors of the Holocaust, courageous souls who dared to embrace life despite their memories of being surrounded by death, memories the likes of which I cannot begin to imagine.
The ceremony, and Remembrance Day as a whole, serves as a humbling reminder of our duty to prove ourselves worthy of the great gift that has been bestowed upon us, that of being Canadian. We can say "thank you", but it's mere words unless one also acts thankful. We can say we remember their sacrifice, but it's hollow praise unless we act on that memory, recognizing our debt by acting upon our gratitude, by building a good life worthy of the sacrifice others have made on our behalf.
To whom much has been given, much is expected. Now, we carry the torch; long may we hold it high, so that it's light may remind us of a shared commitment to help to keep our land glorious, and free.
Posted by Charles Henry at 7:45 a.m.