BLUNDERING Gordon Brown has been caught on microphone calling a voter a "bigot".

The Prime Minister was heard describing an exchange he had just had with lifelong Labour supporter Gillian Duffy, 65 — on the campaign trail in Rochdale, Lancs, today — as a "disaster".

He made the comments as he got into his car after speaking to Mrs Duffy — not realising that he still had the Sky News mic pinned to his shirt.

He told an aide: "That was a disaster - they should never have put me with that woman. Whose idea was that? It's just ridiculous."

Asked what she had said, he replied: "Everything, she was just a bigoted woman."

The PM was approached by the grandmother in the street after visiting a community payback scheme in Rochdale.

She tackled him on a series of issues including the national debt, taxes, student financing and immigration.

Mrs Duffy, a widow, said she was "very disappointed" with Mr Brown's remarks.

After hearing what the Prime Minister had said about her, she said it was "very upsetting".

She added: "He's an educated person, why has he come out with words like that?

Well Mrs. Duffy, this reminds me of something one of the more learned people Canada has ever produced, Northrop Frye, once wrote: education doesn't make bad people good; it makes them more dangerous.

In the world view of the most dangerous people in the West, a woman politely raising concerns about immigration becomes a disaster and a bigot. Pretty much sums up the Gnostic's war against the common people and the nation which can never live up to his world-transforming fantasies. However, it seems that Gordon Brown is now learning what all Gnostics are fated to experience: humiliation at the hands of the unaccomodating reality of ordinary people

Mrs. Duffy has declared she won't vote in this election. Her longtime Labourite faith has been dashed. Too much reality all around. And as Duffy notes the would-be elect are not even trying to transform the most unbending object:

he's not doing anything about the national debt and it's going to be tax, tax, tax for another 20 years to get out of this mess - and he's calling me a bigot. 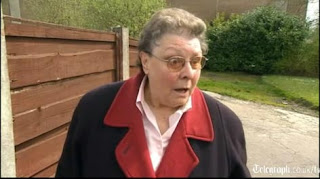 (Mrs. Duffy on hearing what Gordon Brown thinks of her - from video here)
More Video and commentary.

I have said something like this before, but at the risk of being a bore, and because of the times in which we live, I will repeat myself:

The real reason liberals accuse Tea Partiers of racism is that contemporary American-style liberalism is in rigor mortis. Liberals have nothing else to say or do. Accusations of racism are their last resort.

The European debt crisis — first Greece, then Portugal and now Spain (and Belgium, Ireland and Italy, evidently) — has shown the welfare state to be an unsustainable economic system. The US, UK and Japan, according to the same Financial Times report, are also on similar paths of impoverishment through entitlements.

Many of us have known this for a long time, just from simple math. Entitlements are in essence a Ponzi scheme. Now we have to face that and do something serious about it or our economy (the world economy) will fall apart.

Liberals, leftists or progressives — whatever they choose to call themselves — have a great deal of trouble accepting this. To do so they would have to question a host of positions they have not examined for years, if ever, not to mention have to engage in discussions that could threaten their livelihood and jeopardize their personal and family associations...

I heard Frye say such things, and it stuck. It's been something of an obsession with me. Thanks for raising it to the surface again for me.