Remembering the Canadian victory at Vimy 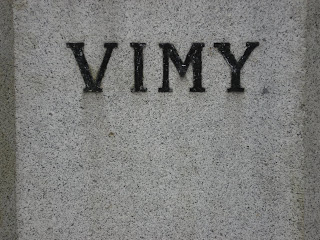 Easter Weekend marks a special moment in Canadian history, as we look back and remember our triumph as a nation during the World War I battle of Vimy Ridge. Ingenuity, forebearance, the urge to surpass those that have come before us... these Canadian traits were called upon to work in unity over a fateful week, as well as our four Canadian Corps divisions, fighting together for the first time. The battle that followed wasn't just a victory for the allies, it was also a victory for Canada:


The German army fortified it with tunnels, three rows of trenches behind barbed wire, massive amounts of artillery, and numerous machine gun nests. The French and British had suffered thousands of casualties in previous attempts to take it; the French alone lost 150,000 men in 1915.

The Allied commanders decided to launch another assault in 1917. The duty was given to the still relatively fresh, but previously successful, Canadians. For the first time, all four divisions of the Canadian Corps were brought together. ...

The Canadian Corps' commanders were determined to learn from the mistakes of the French and British and spent months planning their attack. They built a replica
of the ridge behind their lines, and trained using platoon-level tactics, including issuing detailed maps to ordinary soldiers rather than officers or NCOs alone. Each platoon was to be given a complete picture of the battle plan and given a specific task, rather than vague instructions from an absent general. ... They also employed older techniques such as the detonation of large mines under the German trenches, as well as the digging of long "subways" (tunnels), the ends of which were detonated at zero hour, giving waiting platoons closer access to the German line. 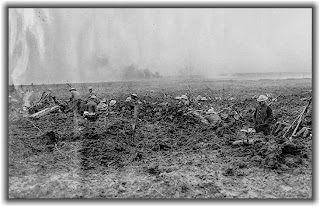 On April 2, 1917, the Canadian Corps initiated the largest artillery barrage in history up to that point. They shelled the German trenches for a week, using over one million shells. The German artillery pieces were hidden behind the ridge, but by observing the sound and light from their firing, the Canadians were able to locate and destroy about 83% of the German guns. ... The German troops called this period the "Week of Suffering". The attack was so loud, the sound of guns could be heard plainly in southern England, some one hundred miles from the front. 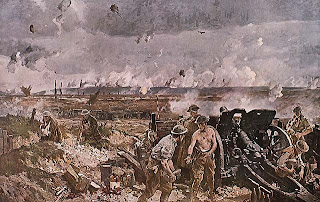 At dawn on Easter Monday, April 9, the 27,000-man Canadian Corps attacked. ... Nearly 100,000 men in total were to take and hold the ridge.
The first wave advanced behind a creeping barrage, known specifically for the battle as the Vimy Glide. This tactic had been used earlier by the British at the Battle of the Somme, but there it had outpaced the soldiers. The Canadians perfected the technique. The troops walked across no man's land, just behind a continuous line of shells (an improvement over previous battles, in which both sides had often shelled their own troops). …

The Canadians also used a new technique, indirect fire with machine guns, which pinned German troops down in their trenches and provide cover for their own troops. After less than two hours, three of the four Canadian divisions had taken their objectives; the 4th Division, however, was held up by machine gun nests on the highest point of the ridge, known as Hill 145. The 87th Battalion suffered 50% casualties. The 85th Nova Scotia Highlanders, who had been intended to function in a supply and construction role, were sent in as reinforcements and the hill was captured by the end of the day.

This is the Canada whose accomplishments we must prove ourselves worthy of inheriting. We are not born great because of our great predecessors, it is a greatness to be renewed each generation. As our predecessors did on the eve of their battle, we can look to those that came before us and, animated as we are by our civilization's belief in progress, we can resolve to improve upon their legacy, by adding to it. We do this not to shame our ancestors, but to honor them; it is our Canadian tradition to do so, much as a parent expects his child to surpass him, as a sign of the parent's success, as well as the child's. That's what it means to be Canadian: out of gratitude for our European heritage, we commit to prove worthy of it, and offer ourselves as its steward. To honor our Canadian past, we aspire to add to their achievements.
But first, comes remembering them.
Posted by Charles Henry at 8:47 a.m.

Charles Henry,
wanted to send you a mail, to say I thought of our Canadian friends on this day before the anniversary of the battle of Vimy.
Well you have written first ! Thank you !

Zazie, what a wonderful, nice gesture. Merci! It is people like yourself that leave no doubt that our nation's sacrifice was worth it.

You know, I was indirectly reminded of France's Good people this weekend, as my wife and I watched a tv documentary on biblical history. A program offered some tantalizing archeological evidence for the existence of Sodom and Gomorrah.
And it reminded me of how many in North America hold the entire nation of France to a higher standard, it seems, than the Almighty once did for a single city. At least He offered to spare Sodom if it could be established that there lived within it ten good people..!
It seems that my fellow conservatives insist that there are even fewer than that number in the whole of France today! And proceed to turn their backs on the nation, refusing to treat its many good citizens as worthy of help, and sympathy.
This is why voices like yours carry such weight, it forces people on our side of the Atlantic to recognize just how many decent, kind and worthy people still inhabit France, in its "Heartland"; their "cri-de-coeur" is well worth answering, no matter how many Chiracs and Royals the majority keep worshipping.

Charles Henry,
Today is the 10th, and TF1(a TV channel) broadcast some images that I found moving : yesterday, at the end of the commemoration ceremonies, it was night, and a line of volunteers from our three countries formed a procession, carrying torches all along the front line of 90 years ago ; it was beautiful, both grand and simple.
What you tell me of the prevailing opinion about France in Canada (I am quite aware that it is the same in the U.S.) makes me sad of course, but it does not surprise me! We (my family, friends and I) have tried to protest, to act and react ; there have been too few of us unfortunately, not only in France but also in the U.K. and all over Europe, with the exception of some ex-communist countries such as Poland ; Once I wrote that shouting in the wilderness makes you hoarse, that is probably why you hear only whispers just now ; that might change and turn really nasty after the elections ; as a matter of fact, many of us are not even afraid of a civil war : if it must come, let it come ; sometimes, you can rebuild on ruins, can't you ?
To conclude for today, may I warn all North Americans that the pest that is poisoning Europe is also attacking you ? That is why I appreciated so much Hérouxville's attitude !