Dag and the Party of the Blood-Sucking Tufted-Puffins

"We are a ray of light in a gloomy world, a ray of hope in a world which is in fact ravaged by intolerance and by hatred. Let's get it right. The world does look to us, the world does ask us, 'get it right, show us how'." Michael Ignatieff.

I'm going to confess right here and now that on rare occasions I do make up stuff and present what I say as the real truth. An example will serve to expose me in all my shameful duplicity and serve as well as a warning to those who believe me simply due to my seeming past trustworthiness. It's like this, see: You have problems in your life, and I can tell you how to solve every one of them in all of five minutes, no matter how many or how problematic they are. No problem. I have the answers. My own problems, (as a friend once explained to me,) will take a life-time to deal with.

I do some editing for a worthless Communist who writes very badly for a worthless Communist newspaper. He makes huge bucks at his Communist job, so I squeeze him to make him redistribute the wealth, downward in my case. It takes me an hour to edit his copy, and then two more sessions to make it readable, at which time I tell him I can do no more, walking away with a fairly substantial afternoon's pay in my workingman's pocket. My own copy, that I don't bother proofreading because it's good enough already and I'm a lone genius anyway, whether people recognize it or not, and they seemingly don't, no matter what I tell them. I charge the Communist so much because he argues with me. Not about my editing but about every other thing on earth. (He's really fucking stupid). I tell him, "Listen Communist Wilson, you're putting up a red herring here, and it stinks." I've explained that a red herring is not some mean-spirited jab at Marx and Stalin but he still gets defensive, so I changed tack and said last time: "Communist Wilson, when you bring up a point like that it's like when we're sitting down to coffee and desert at the diner and you bring up a point having nothing at all to do with what I'd just said: I get pissed-off, as you'll recall, and I say 'Hey, Communist Wilson, look in the parking lot, there's a dinosaur eating that spaceship.' " He nods. I continue: "I do that as a diversion so I can then grab your brownie and eat it before you look back at me and catch me." He sort of nods, and I sort of grin real sly like.

Dear reader, there is no dinosaur in the parking lot. Every time I say that to Communist Wilson I do it only to trick him so I can grab his brownie. I'm shameless, I do confess. I think sometimes that my evil lying ways qualify me for the leadership of Canada's Liberal Party. I could be like Michael Ignatieff, only a winner. But, truth to tell-- if you'll ever again believe anything I write-- I'm just not that slimy. Oh, in many ways I'm far worse, being a Rightwing religious bigot and all, but I don't really have what it takes to be a Liberal in Canada. I'm remorseful too because the Liberals are considering a new mascot for The Party, the puffin. I'd look sharp in feathers. Ba Boom!

"Ignatieff says he likes puffin symbol because: Ignatieff: ''They hide their excrement. ... They flap their wings very hard and they work like hell,' he said, pointing to the portly puffin as a symbol worth of the Liberal party."

In a flurry of Romantic poesy I cry out: "I fall upon the rocky shores of Life. I crack open like an egg dropped 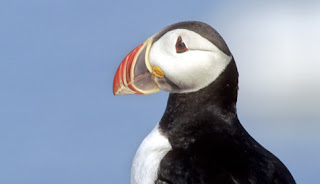 from a craggy cliff. I yoke."

ST. JOHN'S -- Ah, the noble puffin. Its flappy wings and hidden excrement are an inspiration for Liberals from coast to coast - more so than iconic Canadian fauna like the beaver, goose, bear or moose.

"It's a noble bird, because it has good family values - they stay together for 30 years. They lay one egg, and they put their excrement in one place. They hide their excrement," he told reporters yesterday.

"They hide their excrement, they have good family values, they flap their wings very hard and they work like hell. This seems to me a symbol for what our party should be."

Yes, dear reader, I can hear you sigh even as I type, 'Dag, you lyin' dawg, how can you expect me to believe that shite?!"

I'm proud to insist it's true.

I do tell some whoppers to Communist Wilson, and I once told a girl a fib or two, but I tell the truth here. I'm willing to lie sometimes, and other times I'm willing to tell the outright obvious truth. We are a ray of light in a gloomy world, a ray of hope in a world which is in fact ravaged by intolerance and by hatred. Let's get it right. The world does look to us, the world does ask us, 'Get it right, show us how.' I can do that for you, dear reader. I can fix up this whole country in about five minutes, and then lots of time to tinker over the next twenty or so years till pension time kicks in. Send that check, folks, cause I mended my ways and I think I'm gonna run for office.

I'll get it right, I'll show you how. Trust me. Hey look over there! That dinosaur is eating that spaceship!

DAG! I'm no longer a Right wing religious bigot. I'm still known as somewhat cranky even if I'm now a Liberal, so I propose the Blood-sucking Tufted-puffin as our mascot. They are huge and dangerous and uber-macho. Just like me. But I'm a Liberal!

What, would I lie?

Some time ago, I learned that the first rule of modern politics is to hide your shit. I never thought I'd hear a politician admit it, especially one who hasn't done a very good job of it.

But in the internet age, the first rule of politics is becoming transparency and accountability. And the Lieberals can't change that by glorifying guano or promoting eloquent shysters. (They even got the Globe to argue the puffin is arguably Canada's best know sea bird - come on already... just more contempt for the common gull-ible man...) So, Dag, don't go looking to gentrify your commie slumming habits.

A slimy politician. This is my surprized look:

Nope, I'll stick to the bottom where they're less sophisticated if no less obvious.