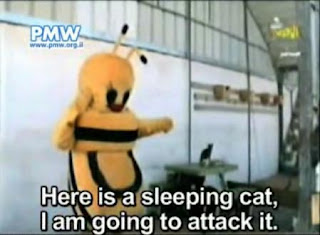 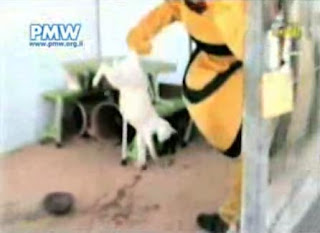 Hamas' notorious kiddie television show, "Pioneers of Tomorrow", teaches palestinian children to not be cruel to animals... through the dubious lesson of providing very clear examples of how to be cruel to real animals.

For the sake of those readers who are justifiably reluctant to watch videos of deliberate cruelty to animals, allow me to describe the short clip for you:
Nahool, the martyr-in-training, is visiting the zoo, where we see him enter into a cat cage and throw cats around by both their tails and the scruff of their neck (mostly one poor white cat). There's some half-hearted attempts to do some kicking as well. Then he sees some lions in a rather small cage, and proceeds to torment them by relentlessly pelting them with stones. This visibly upsets the lions; they lash out at the bee, who torments all decent viewers by remaining just out of the lion's vengeful reach. 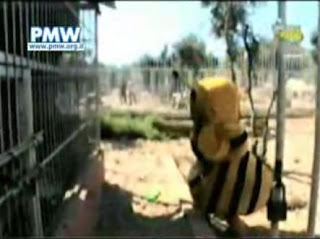 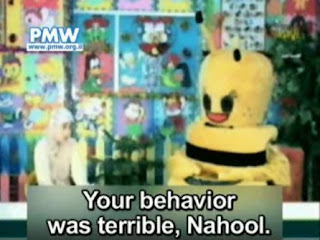 Back in the studio, we discover that all these demonstrations are actually supposed to serve as examples of what **not** to do..! This has got to be one of the most ineffective and probably counter-intuitive means of teaching values that I've ever seen.
As one commentor at the youtube thread remarks, "I wonder who they're going to listen to, the stupid bee or the little girl at the end."
Posted by Charles Henry at 1:03 p.m.