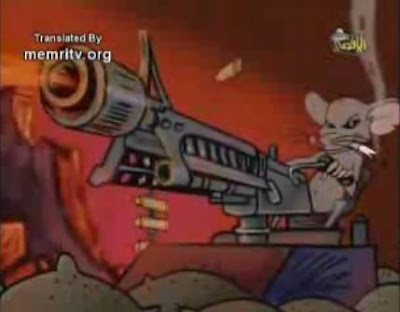 While we offer our kids the droll adventures of Spongebob Squarepants and the earnest Caillou, the palestinians serve up violent cat and mouse civil war cartoons for their young children to dine on.
Memri, the Middle East Media Research Institute, shares the latest educational efforts unleashed by the minds at al-aqsa tv. 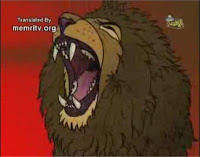 Memri entitles their clip, "Hamas-Style Lion King Vanquishes Fatah Rats on Al-Aqsa TV" ... and the lion does resemble the character from Disney's Lion King cartoon, but I don't recognize any of the scenes as being from that film. I think the lion animation is copied from one of the Lion King sequels, because the draughtsmanship is so clearly superior to anything else throughout the anti-fatah cartoon. It cannot be by the same hands creating the crudely-rendered jihadi rats.
Otherwise the film has a very obvious japanese animation influence, with lots of camera moves to hide the lack of movement on the characters.
Strange choice of animal symbols, I thought; wouldn't the lion be more readily associated with Israel, than with hamas? Especially considering an early scene, where the lion is seen crouching defiantly between gaza and the west bank?
A surprising amount of honesty towards the latter half of the piece, as a rat accidentally kills one of his fatah friends, yet zips around to point an accusing finger at the lion, uttering an all-too familiar cry by now: 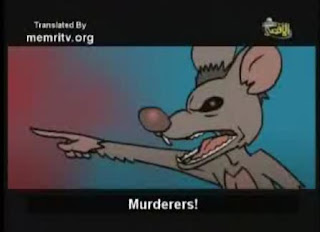 By the end, the same sad question comes to mind, as it always does when watching palestinian "culture"...:
How will there ever be peace, with each new generation freshly poisoned by barbaric filth such as this?

Did you ever get a copy of that video, via a Youtube video downloader? The video is long gone from Youtube now.