Lest We Forget: a thought for Remembrance Day 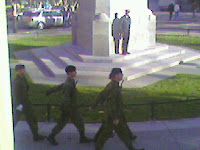 "But there was many a man for whom the brief moment of exhilaration was followed by years of depression. Of the third or more of the expeditionary force that had returned wounded, many were incapacitated permanently, and although no country exceeded Canada in efforts to salvage the human wreckage of the war, the broken soldier became a familiar sight. Not only that, the spiritual wounds that many men received were as serious as the physical. Many old veterans found it hard to settle down again to hum-drum civil life, were hard to please or resentful of employers who had stayed comfortably at home. Civilians began to use the term "returned man" as signifying a difficult, unadjusted, barey respectable individual. That cut. It was a good number of years before authority officially admitted the situation and made provision for "burned out" veterans. The phrase was graphic and the condition behind it real enough: during the late `20's and early `30's the deaths of ex-service men in their forties were reported with inescapable frequency. The veternas had not been entirely re-absorbed into civil sociey by the beginning of the second World War, and the Veterans' Guard formed at that time enabled them to recapture, after a fashion, the days when, a generation before, they had really lived."

What we ask of our soldiers is often tragic, to live the rest of their lives with memories of great violence, of killing and watching their friends be maimed and killed. But humanity has yet to find a way to banish war as the ultimate means of checking unacceptable resentment and aggression. It remains for us to do what we can to support our troops, both those fighting today and those old men, the last survivors of the last century's great wars.
Posted by truepeers at 12:42 a.m.

My grandfather was one of those "broken soldiers" ; he died in 1921, of the lung disease due to the gases he had inhaled in the trenches ; my mother was ten, and the schoolteacher made her say the famous poem Hugo had written to honour soldiers ; I think that must have been too much for a ten-year old girl, but she seemed to consider it normal, and taught me the poem when I was ten ! Because of the education she gave me, I am grieved today when I see our politicians' will to get rid of "toutes ces vieilles lunes"...
This phrase is so very French that I could not find a translation ; sorry!
So, I am most thankful to you for not forgetting.

It's sad to hear about the French politicians. I guess it's because some historical sacrifices for the nation and its freedom have been so great that they cannot but humiliate politicians who today could never ask for anything but a tiny fraction as much self-sacrifice on behalf of their own political fantasies.