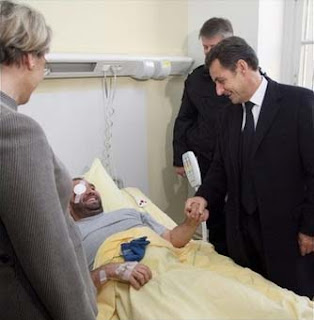 The French head of state, President Nicholas Sarkozy, had been on an important state visit to China when the recent wave of urban violence broke out in France's slum neighborhoods.
Reading the various accounts of his return, both in French and English news sources, I can't help but roll my eyes at what, to me, sounds like an unmistakeable invocation of that time-honored cry, "You just wait until your father gets home..!"
It is the avoidance of accepting both personal responsibility and personal commitment to engaging in solving problems, that leads to the scale of disorder currently plaguing La France, just as avoiding unsavory responsibilities leads to unruly children at home.
With characteristic elan, a returning President Sarkozy went straight from the airport to a hospilized police officer, recovering from a particularly savage beating at the hands of the barbarians now within France's gates. While Sarkozy's good at madly rushing off in all directions, I remain an agnostic on his supposed conservative credentials. Sure, he's "talking tough", and vowing to hold "a tough line", etc. But one person's definition of "tough" is not automatically the same as another's.
It is a major fault of the conservative blogosphere to only read in his words and deeds the definitions they've longed hope for, and not recognize what he is actually doing. Just read sites like GalliaWatch to discover how much of a disconnect exists between Sarkozy's actions and how they are reported in arenas like American talk radio. I have a lot of respect for Michael Medved and Dennis Prager, and other conservative hosts, but I have to wonder how they come to the conclusions they do about President Sarkozy whenever they comment on him. To be sure, he is decidedly more pro-west than other French politicians (and we can probably thank God he was elected and not Bayrou or [shiver-r-r] Segolene Royal), but we need to be honest with ourselves, and see that he is not the testorene Margaret Thatcher he is frequently made out to be. It's a good wake-up call I try to hold myself to, in not mistaking wishful thinking for shallow thinking.
Isn't it amazing; now that the internet has given us all a platform upon which to finally hear what everyone is thinking, we end up forgetting how to listen.
Posted by Charles Henry at 7:58 a.m.

Charles, did you see this story? It seems like Sarkozy has something of a manic personality. Not a good sign, even if you like what he says half the time...