Freak out your prof? 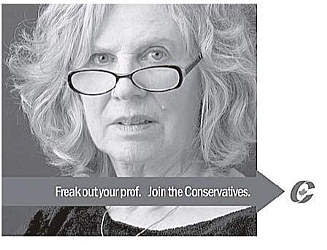 Well, aside from being seemingly oblivious to the fact that much of the professoriate is permanently freaked out (postmodern thought is the belief that any and all signs of the normal betray violence towards the Other and, since the normal, or myths defending it, will inevitably always come to the fore, it/they must be forever opposed in an institutionalized, never-ending, freak out) you've got to get a chuckle over the latest ad from the Young Tories.

But as I say, many academics can't take a politically-incorrect (if any) joke, especially not one that cuts close to the truth: they consider it their sacred duty to be permanently freaked out, reading every myth of the normal as a demonization of some victim, a process of victimization put beyond doubt for all time by the unmistakable model of the unquestionable vicimization, the Nazi and the Jew. Nothing the Jews ever did could justify their massacre.... (But the professoriate, that has been preaching one conspiratorial/Gnostic view of history after another for several generations now?) A good prof. can't miss up a chance to feed on this theme, least of all when he doesn't simply get to play the role of the victim advocate but can be, oh it's so glorious, the victim himself:

A 2004 study by Stanley Rothman of Smith College in Northampton, Mass., found that academics are five times more likely to identify as liberals than as conservatives. The study polled over 1,600 undergraduate faculty members from 183 schools.

But academic administrators say most professors encourage a diversity of viewpoints.

Bruce Feldthusen, vice-president of university relations at the University of Ottawa, said he hasn't seen any evidence of political bias among faculty members. He called the Conservative ad campaign an attempt to "demonize" academia.

"This demonizing of institutions is all too common in American politics, and not very helpful here. We've seen the demonizing of the courts here in the last few years. Are we going to do the universities next?"

Oh the poor man, the next thing we'll be asking him to do is to think through his very dependence on the theme of "demonization" and victimization and to question whether continually invoking the mad mob that wants to turn Stephen Harper into the neocon fuhrer (or is it Bush's Goebbels?) in the name of the normal, oil, and the American lie of freedom, is actually not an intellectually or professionally respectable way to make a constructive contribution to the debate on maintaining a free society. The victimary elites fear, most of all, being pressured to seriously study the conservative truth claim: that the academic victim mongers are parasitic on a free society and are working to erode our capacity to renew our freedom, as they use emotional blackmail (see above) and demand appeasement from defenders of the sacred bases of freedom, all in the name of the victim, a figure they put beyond debate whatever minor nods they make to entertaining various points of view.

But the good news is:

Once considered redoubts for political pariahs, Conservative campus clubs are enjoying a resurgence at Canadian universities and colleges, emboldened by a cheeky ad campaign that encourages students to "freak out their profs" and join the federal party.

Campus-club presidents say membership has increased since Prime Minister Stephen Harper took office nearly two years ago. The Conservatives' ascent to power in Ottawa, they say, has had a multiplier effect on campus, enabling clubs to attract centre-leaning students.

The surge is evident at Queen's University in Kingston, Ont. Despite the university's strong Tory roots, membership in the campus club sank to the low double digits at the start of the decade, when the country's two main conservative parties were still divided.

But more than 200 members now subscribe to the club's e-mail list, said Alex Bednar, president of the Queen's Campus Conservatives.

"People are now seeing us as a more viable option. The more politically ambitious kids are joining, because they see what's happening in Ottawa," said Bednar, a 21-year-old history major.

i thought this ad was a spoof

these belong on juice boxes

Seems like we have another product of the academy visiting.

Sure, they vaguely acknowledge the presence of "diverse" points of view, before insisting for the quadrillionth time that the progressive magic is right and that it knows the reactionary on quick sight.

If I ever had the impression that they read and understood what conservatives write, I could at least write as if to begin negotiating our differences as free human beings in a free society might do.

But true "progressives" never really listen, never really negotiate, just ritualize their listening to a "diversity" of opinions, like the Gnostic true believers they are.

ditch the partisanship for a second bud

your us v. them shtick is borrrring

i'm talking about the ad here

a marketing team actually sat down and decided "we'll reach out to smart, disenfranchised young adults by appealing to their disdain for authority-- the anti-establishment thing is SO HOT right now"

reminds me of a tv spot by the canadian milk industry that incorporated a hip hop video and skateboarding dairy farmers-- "this ain't your daddy's milk!"

at least they knew who they were pandering to: 10-year-olds

anyways this is just a poor pitch: the status-quo attempting to pimp itself as an anti-establishment movement

"freak out your prof"? a tag line for the juvenile. evidence of a marketing team out-of-touch with the post-secondary demographic.

apparently tory student groups are popularizing across the country, why not consult with them for marketing advice?

Maybe you`re right and it is a bad ad. How can one "freak out" the permanently freaked out? The idea and the language does indeed become tiresome.

But as to your other point, in the context of the universities, the Gnostic left is the establishment, and it is the conservatives who are today truly radical in their concern for how a respect for certain constitutional, intellectual, or social orthodoxies might be a basis of real freedom and cultural renewal.

Remember, it is the left, in the French Revolution, that invented the left-right distinction, not today's conservatives who may have problems with it as a way of conceiving what we "reactionaries" are really all about. A conservative can be creative and even, dare I say it, "progressive".

The "us and them" thing can be made boring, sure. But at the end of the day we need to recognize it is inevitable on some level, and we should not buy into Utopian fantasies that would pretend to transcend it. That's the problem with the academic left; they avoid real debate through recourse to Utopian fantasy about unifying everyone under the rule of "diversity". The reality, however, is that conflict is inherent to the human condition and it's the task of those who embrace freedom to work with this reality and to discover how conflict can be made culturally productive. Conflict may be inevitable, but it need not be a zero-sum game.

ok man I GET IT geeze you're a one-trick pony

good talk-- so who are we gassing first

I don't need to gas anyone. Because I can talk about our differences, endlessly.

The problem is those whose only solution to human conflict is to cry victim and immediately move to invoke the Nazis. This response was once fresh and innovative and may have done some good. But it is no longer culturally productive. This means every time we try to rediscover the magic of the first postmodern cry of "genocide", we are left with fewer and fewer meaningful distinctions to organize around, and this lack of difference is the way to meaningless violence. Just because you keep telling yourself you are holier than thou doesn't mean you're not en route to mass murder.

Of course, it will be the nasty sons of bitches who do the killing, while the holy rollers continue to screech "Nazi", each time with less meaning or compulsion according to the inevitable law of diminishing returns.

Radical conservative orthodoxy is not "just my opinion", the moral equivalent of any other fantasy. It is an idea that comes out of a genuine intellectual conversation that expands our understanding of the human. But to see that, you have to be genuinely intellectually curious and test me to see if I'm not just bullshitting you. Don't confuse someone who always begins with the same basic questions about human conflict and the deferral of violence with a "one trick pony". My starting point can take us many places, if you care to dance... A one trick pony is the guy who always ends up in the same place: "Nazi!"

Or, in other words,

"Hey, kids, chop off your nose to spite your prof! Join the CONs!"

I doubt this con job is going over, the occasional campus careerist aside.