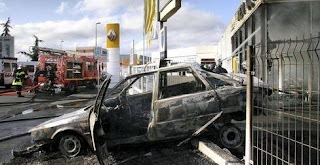 Challenges are casting new light on the "calm" official figures put forward for France's New Year's Evil "French Youth" ritual of car burnings.
While the DGPN ["Direction générale de la police nationale", General Direction of the National Police] claims that there were "only" 372 car burnings occurring throughout the nation on that one evening, France's Socialist Party expresses official doubts on the official figures, throwing a wet blanket on the government's warm reassurances that urban violence is on the decline.

The PS is citing evidence that the overall number does not, in fact, represent a drop from the previous year, as claimed by the government. In Strasbourg, for example, they point out that while the official report claimed only twenty burned cars, the prefecture for the city actually reported that it was a total of 51 cars that were burned overnight.

In doing some research on the discrepancy I came across this revealing article from way back in October 2007, from a news outlet in the beleaguered French city of Toulouse, reporting on the significant rise in car burnings for that community, up to that point in the year.

The article contains a reference on the manner in which these statistics are calculated, which I don't see being reported in the English media accounts of these incidents. (Maybe it is, and I just keep missing it).

You see, the numbers of car burnings are counted as two distinct statistics. One set of figures is kept for cars deliberately targeted for fiery attack, while a separate set of figures is kept for cars that burn only through the unintentional spreading of flames coming from the first set of cars, those that were deliberately set on fire.
At first I thought that this might explain the competing figures for New Year's Eve's car burnings, but no; the official statements account for the distinction. They clarify that, out of their number of 372 torched cars, 273 were "deliberate". So the discrepancies remain.

What follows is a loose translation of the article out of Toulouse's La Depeche newspaper for October 4, 2007. "More than 1,000 cars burned":

1,122 cars have been burned in Toulouse and surrounding banlieues since the beginning of the year. This is a 58% increase over that of the previous year at the same time. When the number of vehicles burned due to the spreading of fires [is added], then the number grows to 1,490 cars burned since January 1st 2007, a record number.
... For several days, rue du Lot has become accustomed to joyrides of [stolen] cars and motorcycles. When the troublemakers overturn cars onto their roofs, the first flames shine out into the dark of night, causing the police to arrive. For about a year, "groups of people have radicalized themselves out of any control", says a resident. Toulousian torchings follow the national trend: 49,114 cars burned in France in 2005, compared to 44,075 in 2004...
Garages tasked with towing the charred vehicles don't know where to pile up the carcasses anymore. Charged 250 euros, the nightly rate, the cost of towing away the burned vehicle is still the responsibility of the insured. "Many times, the victim who just lost their car doesn't have the money for paying their bill", says a tow truck operator.
...

A commenter at the site writes in with a personal story:

"In our street in the neighborhood of St Cyprien an abandoned car was left there for several weeks. When they were alerted about it, my municipal police told me that it wasn't their responsibility, same with the national police. Shortly thereafter the car was set on fire one night. The two cars parked in front and behind it were damaged, the trees were burned and this required the intervention of the fire department. Now, who is responsible?"

An article published today in the same newspaper reports on how Toulouse's total car burnings for 2007 ended up much higher than the national average. Here's a summarized translation of their article, "Twice As Many Car Burnings Than Last Year At This Time":

Over New Year's Eve, Toulouse experienced 26 car burnings, five times higher than on a "normal" night. This is twice the number of New Year's in 2006, where 13 cars were burned.
... Firefighters intervened each time under police protection. Some runs lasted up to six hours... Toulouse reached the worrisome level of 2,000 car burnings in 2007.
... At 3:00 pm in the afternoon, the firefighters arrived at rue Erik-Satie to put out another car fire. Helmeted riot police carrying shields had to protect the firefighters on an embankment bordering the parking lot of an apartment building.

If ever I caught someone burning my car, in fact, my motorcycle, he'd be riding it to Hell. What's the matter with the Europeans? Do they give cars away for free? Do the French give people time off work to go shopping for a car? Is a personal possession the worth and commitment in money and emotion and identity that a vehicle is for most just nothing to them? I find myself pondering even the purchase of a can of beans to be worth my while, and if someone were to grab it from me on the way home I'd nail him, no matter who or where from. If I lost more than I gained I'd still go for it because the beans are mine. Imagine the result of torching my bike. Am I that different from others or are the Europeans that different from the rest of the world's people?

When a surgeon or a dentist knows he/she (hell! I'll say they!), they give you some drug to make you completely or partly asleep, don't they ? Well, governments give TV sets and parabols.....

Zazie,
the government gives you satellite dishes and television sets? Or do you mean they give away the programs over television? (I think you have mostly state-run television stations there, compared to our privately-owned selection here and in the US, which we must pay for, buying various packages of stations)

Dag, one interview I left out of the story for space reasons concerned a fellow who watched his motorcycle get burned right in front of him. After complaining of the hardships of losing it, and the costs in replacing it so that he could get to work, he adds, "well I wanted to get a newer one anyway..."
In my personal book collection, I have many books written during the Second World War, and within them are many first hand accounts of the Blitz. Visitors to England are always writing admiringly of the forebearance and stiff-upper-lip calmness of the British under the german bombing; a shopkeeper is sweeping away broken glass from his several damaged storefront and sighs, "that hitler is such a nuisance..." Many stories like that one, of reserve and resolve.

It seems the French are trying to echo that calmness... but without the nation-wide commitment to counter-attack that historically went with it!

Over the two years I've been blogging about these stories out of France, the underlying theme behind the French government's reaction has remained the same: finding ever more creative ways to adapt to the problem, rather than finding ways to reduce the problem in the first place. (I don't consider the French left's policies of bribing the vandals to leave them alone, as a serious attempt to solve the problem)

The culmination of this adaptation was the government's declaration that New Year's eve was a "calm" night, despite many police officers attacked, private citizens' property damaged, especially cars, on a scale several times higher than on an average evening.

How closely does the government's (and the French media's) attitude represent a reflection of that of the people of France? Every day there is a growing divide... that's also been a theme I've seen in the two years I've blogged about this.

During WW II the British maintained an admirable stoicism in the face of German carnage and destruction of property -- while the British also fought back with everything they had or could borrow. A Brit might well have watched his bike burn and might well have shrugged it off stoically, but he would also have been part of the militia ready to take on landing Germans at Dover. The notorious Gallic shrug isn't stoic.

I know French people, and they are not some other species. Some will gladly give up medical careers for lives as sewer-dwelling journalists if that's what a friend of the people is required to do. Some French are Free.

There will never be a mass of free people: only ever a few who will lead and act while the others help or maybe follow at best. But there will be some few who act and lead regardless. Who will they be? Will they be men who are good and true or will they be maniacs longing for the Terror? Leave it simmering long enough and those who dwell in sewers will make that answer plain.

There will never be a mass of free people: only ever a few

-Never is a long time. If you believe in freedom, as something inherent in human nature, it seems to me you can't pretend to know what the future holds.

Ha! You talk to me about this in a thousand years and then we'll see who knows what.

i've once seen a burning car, yet the authorities says , it just got burned all th sudden, very strange huh, nice review....

Valuable information and excellent design you got here! I would like to thank you for sharing your thoughts and time into the stuff you post! Thumbs up