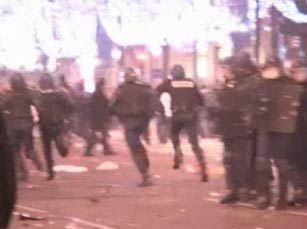 While there had been many headlines alerting party-goers not to expect any fireworks in Brussels, it seems there were to be no fireworks displays for Paris either, much to the surprise and disappointment of many of the 400,000 celebrants who gathered at the Champs Elysees to greet the New Year.

While there were no sparks in the sky, there were plenty of flames on the ground, as French Youths torched over one hundred cars in Paris alone:

"The night was relatively calm, without notable incident, there were very few direct clashes with the security forces," said a spokesman for the national police.

... Police had stepped up their presence on French streets in anticipation of the year-end celebrations and the sale of petrol in cans was banned in some places.

The French city paper, Le Parisien, carries some additional details, including a rather depressing video, where the soundtrack rings with showers of glass breaking and bursts of tear gas cannisters: 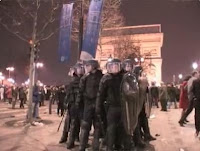 It was hardly ten minutes after midnight before fights broke out along the block. Groups that seemed not to be organized started harassing the CRS [riot police] and bombard them with glass bottles and beer cans.... On four occasions, within a short radius of 100 meters, [the riot police] launched counter-attacks. Three times, they used tear gas to dislodge the rioters, who were all very young, for the most part.
...
Many strollers who came to celebrate the passing of one year to another left with tears in their eyes, caused by the tear gas.

We had been waiting for 2 hours near the Arch at Champs Elysees to see the fireworks!There was nothing, and we were shocked, the same as all these 400,000 people from all over the world who came to Paris to meet 2008 at Champs Elysees!And I understand the rioters who expressed their disappointment by torching cars!We are never coming to Paris for the New Year again!

anon,
I'm sympathetic with your frustration. It was pretty rude of Paris' burgomeisters to not bother to tell anyone, especially guests, that there was to be a break in the routine, and have no fireworks this year. They can put helicopters in the sky, and thousands of cops on the street, but can't put a press release in the newspaper to alert citizens that the fireworks had been canceled..? What are they thinking?? (and why isn't that cancellation more of a story than it is?)

You don't really sympathize with the thugs responsible for the car burnings, though, do you? The vandals were attacking citizens like yourself with those gestures, not "the government" or "the system" or any other generalization. It is an assault on civilization itself, and should not be tolerated, let alone empathized with.

They burn cars like this every year.
It's not because the fireworks were canceled.

That's being very naive to think that's why they were torching cars.

wazpy is absolutely right..."they" burn cars, and schools, and shops, and sport-halls, and police stations, and ....fire-stations, just to show that they have been allowed to impose their rule on the country ; nos, the real question is : who allowed them to do so, why, and what should (and certainly) will we do to those responsible for this state of affairs ? Once upon a time, those traitors were hanged or shot ; I know you wish there were no more violence ...Every angel I happen to meet wishes the same, but when they react, I am afraid the French, as is usual with them, overdo their revenge!