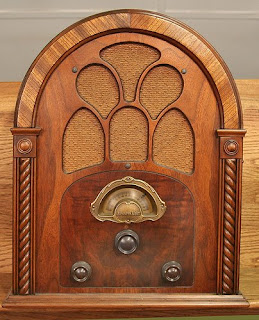 We're going to countdown to Christmas in a special way at Covenant Zone this year: through a daily posting of old radio dramas that were originally performed at Christmas-time wa-a-a-y back in the "golden age" of radio, the 1940s and 1950s.

In the days before television, families gathered around their radios for a style of home entertainment that has all but vanished today: radio drama. Comedy, drama, horror, science-fiction, adventure, detective shows, soap operas, westerns, romance, and so much more were available and waiting as the listener turned their radio dial. The Christmas season would often bring out the best in the writers, actors and the rest of the production team behind-the-mike, and we'll be serving up a Christmas-themed old radio program every day this week until Christmas morning.

I'm going to start off with one of my favorite series, the long-running situation comedy The Great Gildersleeve. This episode was originally broadcast on Christmas Eve, 1944. World War II was in its interminable last phase, where the end of the conflict felt ever so tantalizingly in sight. There had been much hope that the success of the D-Day landing would see the European war, at least, resolved in time for Christmas, but that was not to be; you can well imagine the disappointed families tuning in to this radio show, missing a father or uncle or brother or son at their holiday feast. And for some families, news had reached them that the empty chair at their table would stay empty...

The Great Gildersleeve series was one of the first "spin-off" programs, as the title character had begun on another popular comedy show where he gathered so much attention from listeners that he was given his own series in 1941. That fall Throckmorton P. Gildersleeve moved across the radio dial to become the bewildered guardian of his orphaned niece and nephew, and each season thereafter would see the show evolve into an interesting combination of soap opera and situation comedy.

So turn down the lights, sit back and enjoy Gildy trying to shed his melancholy in time to enjoy a wartime Christmas on December 24, 1944:

Thanks Charles, that's a first with "Gildy" for me. Great to put the old imagination to work again!

I'm looking forward to hearing your next selection.

Thanks! More good stuff coming up.

Maccus, I'll take this opportunity to wish you and your family a Merry Christmas, and best wishes for the New Year. Hope things are going well for you... our comment threads are all the poorer these days for missing your contributions to them.