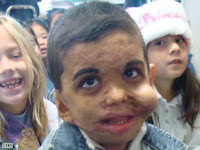 When he was four years old, Youssif was doused with gasoline and set on fire by jihadi savages in Iraq. As we blogged last July, Youssif and his family have since been brought to the United States, where generous donations of time and money have given the little boy an increasingly promising second chance at happiness. Multiple operations are saving his badly burned face, slowly but surely bringing back to the surface the child, and the childhood, that had been so terribly scarred, seemingly beyond hope.

His mother, Zaineb, stands at the back, ...tears rolling down her face. "I am so proud of him," she says. "It reminds me of what he was like in Iraq when he used to sing in kindergarten. I felt for a moment that none of this had happened. My son was back, without fear, strong."
...
Today Youssif plays freely, without fear. "Let's race" he shouts to his friend Brandon as the two boys dash across the schoolyard. A couple of minutes later the two are playfully jostling over a rubber ball. Youssif shrieks and bursts into laughter as the two play catch.
"It's like this weight has been lifted off of me, off of him," his father, Wissam, says. "It's like we've left this dark, depressing state where we were consumed by Youssif and the attack that had happened. You know, it's so hard to see a child, my child, go through something like this. When I see him like this, I feel like he's coming back."
...
Youssif has undergone more than a dozen surgeries. Much of the thick scar tissue around his eyes, mouth and nose -- left by his treatment in Baghdad -- has been removed. He currently has yet another tissue expander in his left cheek, intended to stretch out "good skin" to be used to replace his scar tissue.
...
He's thriving at school, loving the first grade. "He's amazing," his teacher Mario Daley says. "I work with children of all levels of ability, and Youssif, with what he's gone through, his motivation, what he produces is fantastic. He just tries so hard."
…
Before the attack, Zaineb says, Youssif wanted to be a doctor. Now he says "I want to be a doctor to help burned Iraqi children."

Seeing Youssif at school, at home, at play, the normalcy of it all, reaffirms the miraculous power that comes in the wake of a positive attitude. A realist may dispute the technical accuracy of the old saying that applauds Laughter as the Best Medicine; for a romantic like myself, Youssif’s playful giggles and guffaws renew my faith in that lesson, along with one more: that hope is the best trigger for laughter.
Posted by Charles Henry at 10:28 p.m.

There is always a brief moment on New Year's Eve when all things bad recede and all things good seem possible.

I hope you have a safe holiday - are you still digging out? So far, it's been one of the most uncomfortably cold winters on the East Coast. With vicious winds making it much worse.

I look forward to the new year with... curiosity.

Thank you, Tiberge,
I agree that New Year's Eve is a time to reflect on the eternal potential for renewal of spirit, and of character. I always treat this time of year as a solemn occasion.

There's quite a scandal brewing here regarding "digging out", as you put it... nobody's doing it! The city seems to be using its few snowplows with Scrooge-like parsimony, and not enough citizens are doing their bit to keep the sidewalks in front of their homes clear of snow, as per their civic obligation.

As a result, it's very tricky, and dangerous, to get around right now. The weather keeps fluctuating between warming up and cooling down again, leaving what little snow clearance that has been done with an invisible and treacherous coat of ice, depending on what time of day one is outside.

I must say, however, that the bus drivers that I've seen are behaving above and beyond the call of duty, setting a new standard of chivalrous service. I've seen them actually leave their warm busses in order to accompany elderly riders out to the sidewalk, to make sure they are exiting the bus safely. Very impressive!

I think this coming year is one of great opportunity; my prediction is that there will be a lot of "mugged by reality" transformations taking place in the next little while, with many people coming to conclusions they wouldn't be caught dead assuming, just a few years ago.

It makes it all the more important to maintain the discipline, civility and grace in order to be a good ambassador for one's beliefs, to make it easier for people to see the sense behind their shifting values.

All the best to you for the New Year, may the stresses weighing down on you, "off-screen", lessen their burden over you, leaving you time (and motivation) to post about your knowledge of French culture and history as well as current events, over at GalliaWatch.