The Other War On Christmas 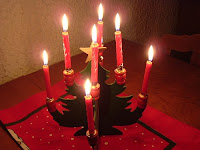 With apologies to Bill O'Reilly and John Gibson, I wish that some of the energy devoted to the annual focus on retailers wishing us "Happy Holidays" instead of "Merry Christmas", as well as the attention given to accounts of Nativity scenes being replaced with Frosty the Snowman in public spaces, could instead be re-directed towards the violent and far more fearsome wars on Christmas taking place around our world at this time every year.

For instance, it looks like there's another bloody Christmas in the works for the besieged Christians in the north-east state of Orissa, India. From Compass Direct News:

Christians in Orissa state are anticipating Christmas with fear as Hindu extremists have called for a state-wide bandh, or forced shut-down on all sectors of society, on Dec. 25 – a move that could provide Hindu extremists the pretext for attacking anyone publicly celebrating the birth of Christ.

The state’s chief minister has said there should be no such shut-down but stopped short of prohibiting the Hindu extremists’ plan, and the Hindu extremist umbrella organization Sangh Parivar has vowed to press ahead with it, reported newspaper Outlook India on Nov. 20.

... Ratnakar Chaini, president of SLSSS [Laxmanananda Saraswati Condolence Society], called for the shut-down in a massive rally in Delhi on Nov. 15. Inflammatory speeches at the rally by Chaini and others led Christians to believe the shut-down would serve as the pretext for another spate of violence against those publicly celebrating Christmas. At the same time, in Orissa’s Kandhamal district, more deaths of Christians have been reported in the past two weeks.

Many tens of thousands of Orissa's Christians will be spending Christmas away from their homes, seeking refuge in the squalor of emergency relief camps set up by the state government as a result of the violence waged in as many as 300 villages, seeing 4,000 houses and 157 churches burned down since August 2008.

The Times of India recently tried to call attention to one especially heartbreaking consequence of the hard life the Christian refugees must deal with in these relief camps: unsafe deliveries for pregnant women.

...
Stranded without access to doctors, hospitals or medical kits, most women are delivering in relief camps with the help of fellow refugees and — if they are fortunate — some anganwadi workers.

But not all have been lucky to be able to give birth. "There have been 10 miscarriages in the past week," said Jyotirmoy Naik in Cuttack. "Nirmala Digal, Mita Digal, Ranju Naik, Padmini Naik, Mithila Naik — all miscarried because there's no help for expecting women at the camps."
...
Rev Prakash Naik, who's active in the Raikia camps, said even if women do manage to give birth, the conditions in the relief shelters are so bad that mortality is a big fear. "Just look around Vijaya school camp and you'll see what I mean. Survival is a huge factor. Water has gathered in dirty, mosquito-infested puddles and people are defecating in the open."

Many other miscarriages took place as Christians fled to the jungles and stayed there for days with attacks against them showing no signs of abating. "Pregnant women suffered as they hid in the forests. While lack of food hindered healthy deliveries for the emaciated, others slipped and fell while running for their lives," said Krishna Kanta Naik, a social worker in Baliguda. "Nine women have delivered at the camps in the past week, but the children are very unhealthy."

We've got it sinfully easy if our personal experiences of "persecution" involve debates over whether to listen to "Oh Little Town Of Bethlehem" or Rudolf the Red Nosed Reindeer at office parties, or if someone should or should not wish us a Merry Christmas when we shop at their store. For too many, Christmas will bring an entirely different perspective to the idea of a Silent Night:


The Persecution Report (December 2008)
Uploaded by The_Voice_of_the_Martyrs
Posted by Charles Henry at 6:42 a.m.