They have a tyrannical approach to politics. When they organize political rallies, they call on the unions who use funds taxed from all the workers at union workplaces, and then bar non-conformists from  participating, making sure that only the official line is to be heard and that standard (union-funded) signage predominates. As Downtown Eastside Enquirer reports:

A union member showed up at the Vancouver rally organized by the ‘Yes Coalition’ on Thursday evening carrying a sign that said all the wrong things. He was denied entry to the ballroom where a rally was being held in support of a non-confidence vote planned for Canada’s parliament in January to oust Stephen Harper as Prime Minister. Unlike the roughly 1,000 people who jammed the ballroom in Canada Place, the dissident did not support the coalition between the NDP, the Liberals, and the Bloc Quebecois which would replace the Harper government. 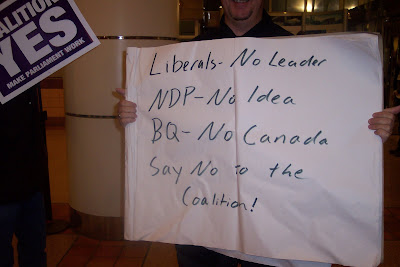 The dissident stood in the lobby as people filed past him into the ballroom. He was incensed that he was being prevented from entering, explaining to members of the crowd that he is a member of the Public Service Alliance of B.C. which he said was an organizer of the rally.
[...]
Did I mention that restricting democracy was what Stephen Harper was being accused of at the rally inside the ballroom?

Inside the ballroom one speaker after another accused Prime Minister Stephen Harper of undermining democracy. Peter Julian, MP for Burnaby-New Westminster, said in a forceful speech: “Stephen Harper has usurped democracy. He has padlocked our Parliament.”

The obviously scripted line about locking the doors of parliament turned up repeatedly in speeches criticizing Stephen Harper for avoiding a non-confidence vote on Monday
[...]
the most striking symbolism was when the videotaped speech from Liberal leader Stephane Dion to this NDP-laden crowd malfunctioned. “Ohhhhh,” I could hear people seated around me saying in low tones. “It’s not cued up,” said the chair. When the video did come on a few minutes later, we could see Dion’s face but the sound didn’t initially work.

Dion said we are facing the worst economic crisis “since the great depression”. That left me wondering if he was telling the truth.
[...]
Even Santa, who was walking around the Canada Place lobby greeting people, wasn’t finding it so easy to get laughs. When two men who appeared to be rally organizers spotted a couple of young children sitting behind a pillar with their mother, they walked Santa over to greet them. “Ho, ho, ho!” Santa asked in a jolly tone, “So do you support the Coalition?” The young mother responded in a less than festive tone, “No.” Santa responded, “Neither do I.” Oh, Oh, Oh. Santa instantly moved on and the children, like most Canadians, were left asking questions about what exactly was going on.

Well, if that doesn't settle it - Santa's love and wisdom - I don't know what will.

I had the pleasure of attending today's pro-Harper, pro-democracy, pro-Canada rally at Vancouver's Library Square, in the company of "Reliable Sources" the author of the above excellent report. RS promised to have some photos up on The Downtown Eastside Enquirer later.


One thing to look for: unlike the union-funded signage of the pro-coalition rallies, the anti-coalition people use their own time and resources to make their own signs.

Here are some of RS' photos of today's event which featured a number of MPs and citizens giving speeches to a crowd of maybe 300 severely normal people who, among other things, joined in singing O'Canada, in marking the anniversary of the Montreal massacre, remembering our fallen troops in Afghanistan, cheering for democracy, offering up chants of "Harper, Harper", and generally denouncing the rank arrogance and cancerous opportunism of Jack Layton, Stephane Dion, and Bob Rae. It was a chilly, rainy day in Vancouver, but people generally were in good spirits. 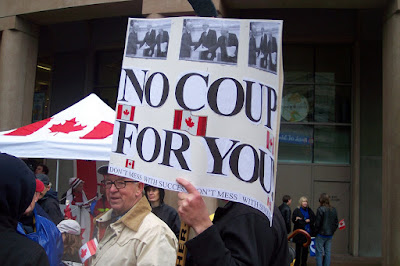 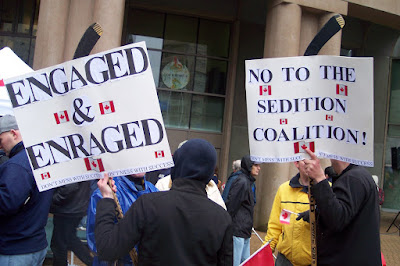 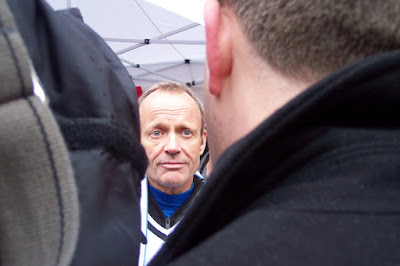 Wow. That kind of reporting is a sure sign of the end of the Mainstream Media. Excellent work. I'm very impressed. Thanks to you both.

Though I'm definitely not in any Stephen Harper fan club, I have to begrudgingly agree with you Truepeers. I wouldn't sleep soundly at night knowing that the NDP were sitting with cabinet positions in Ottawa.

The Coalition, I have to admit, smells too much like political opportunism, but in fairness its formation was instigated by our P.M.

The funding for the parties issue aside, I think Harper's approach of waiting until the new year to see what steps the Americans would take in regards to a stimulus package was the right course. The Coalition power grab could not have come at a worse time.

The only thing that has really irked me about this is the 'Coalition with Separatists' slant. I'm a Federalist, but are the voters who supported the PQ not Canadian citizens with every right to have their views represented in parliament? This 'the separatists will have a say in national politics' things doesn't fly, they ALREADY were a part of national politics, they hold federal parliamentary seats for crying out loud. Just didn't like the spin, that's all.

wow, things sure took a real down-turn in the comments, huh?

It's good to see such good citizen journalism though. Good job, you guys.

Vancityguy is in love with Dag. When is he going to make the move and ask Dag for a date?

I think you're right. Some folks love me and some hate me, and some confuse the two, to my dismay. It's happened before, so I'm almost used to it.