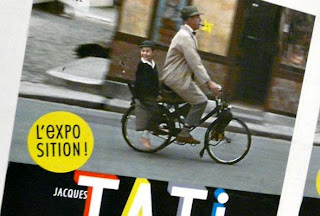 France's strict anti-smoking laws have stripped the iconic Mr. Hulot of his trademark pipe from a series of transit ads promoting the current Jacques Tati exposition in Paris' Cinematheque française.

Mr. Hulot's pipe was as inseperable from his comedy character as Charlie Chaplin's cane and bowler hat would be from the Little Tramp, but such cultural memories count for little, it seems, against the letter of the law.

Censorship of the unforgivable pipe was performed on all 2,000 posters by Metrobus, the advertising arm of the RATP, ("Autonomous Operator of Parisian Transports"), which oversees Paris' transit system. Their moral watchdogs have replaced the pipe with a preposterous pinwheel, the very type of modern "progress" that Jacques Tati skewered so relentlessly in his wonderful comedies.

"The law is the law", says the RATP with a gallic shrug [my translation of the original French article]:

"Our legal department judged that the ad was against the [1991 Evin law, which restricts advertising for smoking]. We have already modified several ad campaigns of this sort, such as when an alcoholic beverage had been highlighted. Why would we do otherwise when it comes to tobacco?"

The law in question prohibits "all propaganda or publicity, direct or indirect, in favor of tobacco or tobacco products".

The current Minister of Health and Sport, Roselyne Bachelot, whose predecessor Claude Évin was responsible for the strict anti-tobacco legislation, is blunt in her condemnation of the whole affair. "No, I am not in favor of taking away Jacques Tati's pipe!", she made clear to reporters at the Health ministry.

Even the CNCT ("Comité national contre le tabagisme", the National Committee Against Smoking) are in agreement that the transit company's well-intentioned censors have over-reacted in this case:

"This is a promotion for a cultural event, not for smoking. It's not because you're seeing Mr. Hulot on his bike, with his hat and his pipe that will make you want to smoke", explained CNCT president Yves Martinet.

Interviewed by the newspaper Le Parisien, Martinet goes on to say:

"..And the fight against smoking is not a call to rewrite history. Must we ban the Sherlock Holmes books under the pretext that he, also, smoked a pipe?"

The irony in all this, as any Jacques Tati fan will appreciate, is that at no point in Mr. Hulot's Holiday, My Uncle, Playtime, or any of his classic films does Mr. Hulot ever actually light his pipe..!
Posted by Charles Henry at 6:31 a.m.

I think we did something similar when a statue of FDR was built for a memorial in Washington (I believe it was the WWII memorial). He always had a cigarette in a holder. I forget now what they replaced it with - if anything. To portray him without that cigarette holder was like... Chaplin without his cane! Or Holmes without his pipe, or Ernie Kovacs without his cigar. The inanity of such laws is matched only by the stupidity of people who laud such laws as "good for the health". Some of those people are pot smokers, but they go up in arms when you say pot should be banned.

You're right, I forgot about the FDR memorial statue. It also made a point of showing him in a wheelchair, something the man himself was loathe to do when he was alive.

Don't you just love the comic irony in the name of the fellow running the anti-smoking group: Yves Martinet.

Jacques Tati would have had a field day with the modern-day health fetish, which has confused health issues with moral issues.

One good thing to come of all this is that it has inspired me to watch Mon Oncle again.