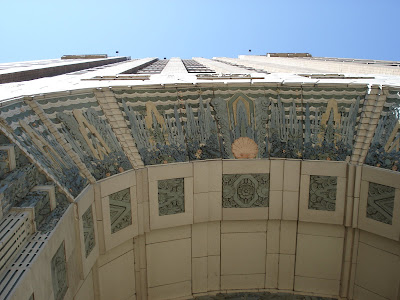 Some random news from random reading this fine Tuesday morning:

Compromise: Thai merchant marries twin sisters. "For the first three nights of the week, I will sleep with Ms Thipawan and the next three will be spent with Ms Sirintara. As for every Saturday, the three of us will sleep together."

Survival: Thomas Sowell's latest column on political correctness. "Bending over backward is a very bad position from which to try to defend yourself."

Nightmare: Daily life in Peshawar. "Today, people rush home soon after sunset.
On the outskirts of the metropolis, police barricade themselves inside fortified stations when dusk falls, too frightened to venture out when the Taliban come roaming.
‘We are really scared. The Taliban are coming closer and closer to this city,’ Hidayat Khan, a salesman in a downtown garments shop, told AFP".
Discovery: Long lost Admiral Horatio Nelson battlefield memorial, commemorating his victory at the Battle of the Nile, finally re-located... through Google Maps!
Posted by Charles Henry at 6:25 a.m.

You show a photo of The Most Beautiful building in all of Vancouver: The Marine Building.

Life is good. Sometimes one just has to look a little bit harder than one might expect.

"‘We are really scared. The Taliban are coming closer and closer to this city,’ Hidayat Khan, a salesman in a downtown garments shop, told AFP".

WHY is Mr. Khan scared?

I'll tell you: Because his idea doesn't exist.

Pakistan is a young country, relatively. It has that Islamist hard-line tradition to overcome. [Women are chattel, don't drink (!), etc.] The country has tried to modernize; but bullies, using dogma, are, usually, stronger than the Idea, at least initially.

Seems to me that the coming conflict, Islamist-wise, must come down to this: EITHER we defend our way of life; and, that comes down to annoying, but necessary, specifics, argument-wise, and human-solving-problem-wise, in conversation; OR the bullies win.

I have a partial grasp of the history of India from the time of the late Mughul dynasts and the European and eventual British take-over of the Indian principalities through to partition.

Maulana Maududi was against partition because, like all fanatics, he refused to compromise, demanding all of the sub-continent rather than P.unjab, A.fghanistan, K.ashmir, and S.ind: PAK: "Pure."

The partitionists didn't get what they wanted; but Maududi came close to his own goal in that he moved to pak and eventually became the foremost theorist of Modern jihad of his time, paving the way for bin Laden via the Muslim Brotherhood theorists heavily influenced by Maududi.

Ali Jinnah is a story worth pursuing in light of our current leadership: An Oxford poet/student who demanded a state for Muslims. And the creepy fool Gandhi who made it all happen while the mental retard Nehru giggled through the massacre of perhaps 50 million people. At the heart of it all? The totally famous English civil servant, Edwin Montagu, the epitome of Modernist evil.

When we look at the partition of India we see in our day a replay, not as farce but this time as tragedy. Thanks to the Montagus in power today, this train either goes off the rails or crashes head-long.

But what do Pakistanis say?

"The complete Islamization of Pakistan has been the genuine and long-standing demand of the overwhelming majority of Pakistanis.

"This demand surfaced as soon as the inception of the country [in 1947], since the driving force behind the Pakistan movement was the need for a separate country for Muslims where they could protect and practice their Islamic ideology.

"Consequently, the mounting public pressure led the Constituent Assembly to pass the Objectives Resolution, making a sacred covenant with the people of Pakistan that the Koran and Sunnah will be the guiding principles of the constitution, legislation and policy-making of this land of the pure.

"The British-trained establishment, including the civil and military bureaucracy, were, however, averse to the idea of Islamization and wanted to faithfully preserve the British system and the Anglo-Saxon system of government, besides the laws formulated by the colonial masters for subjects. Those people considered themselves the legitimate successors of the British colonial rulers, and aspired to step into their masters' shoes to enjoy the same powers and privileges exclusively reserved for the privileged class of British officers colonizing the subcontinent for over 200 years. [...]

"The entire debate that Islam should not be the system of governance in the country was the thinking paradigm of those who are mental slaves to Western culture and averse to the Islamic ideology. It is an undeniable fact that Muslims from the length and breadth of the subcontinent strove for the creation of Pakistan, and rendered sacrifices that are matchless in human history. The proponents of the baseless argument that not Islam but economic reasons were the basis of the Pakistan movement have no answer as to why the Muslims of [Indian states such as] UP, CP, Calcutta, Madras and Bombay, etc., endeavored for Pakistan despite knowing that their areas would not be part of Pakistan.

"Evidently, they were striving for the realization of the dream of a separate homeland for Muslims, to enable them practice Islam freely under the system governed by the Koran and Sunnah. [...]

"Pakistan is not just any state based on geographical entities. It is the embodiment of a definite ideology and religion. As the Father of the Nation, Quaid-e-Azam Mohammad Ali Jinnah, put it: Pakistan came into being the very day the first Muslim set foot on the subcontinent. Pakistan is a result of the Two-Nation Theory [i.e. that Muslims and Hindus cannot live together] that clearly spells out that the life of Muslims is governed by the Islamic system based on the Koran and Sunnah. Until we harmonize our lives, economy, society, Constitution and legal system with Islam, our society will continue to suffer from internal strife and friction.

"Those who believe that Pakistan can be secularized by separating the Islamic system from its state are suffering from a serious fallacy. What they conveniently ignore in their bias against Islamic codes is that Islamization of the country is not just the demand of what they call some extremists but is the strong desire of an overwhelming majority of the people, millions of whom are ready to sacrifice their lives to achieve this objective, like those who laid down their lives in the Pakistan Movement.

"Though this majority is under the strong shackles of a tiny minority of Western slaves, the dawn of an Islamic revolution is round the corner. This is the era of a global Muslim renaissance as slavery's shackles are breaking and the enemies of Islam are on the retreat after the huge fortresses of their military and economic might are coming down under the pure resistance and sacrifices of the believers." [...]

"Regarding the argument that promoting Islam would enrage Washington and the West, we would become isolated, and be dubbed as fundamentalists, etc., it must be kept in mind that alienating Islam will negate our existence and disintegrate the country. Islam is the basis of Pakistan, since it was created for Islam and not on the basis of some homeland."

From: Jihad Watch, "The complete Islamization of Pakistan has been the genuine and long-standing demand of the overwhelming majority of Pakistanis"

Like Balkan Muslims, Pakistanis are no different from their Indian fellows other than that the Muslims are Muslims. It's not race, ethnicity, economics, or philosophy: it's a demand for a Muslim theocracy and the Muslims' place as rulers within it.

The British couldn't find Muslims to work within the Raj as civil servants, (the Muslims being the ruling class imperialists prior,) because Muslims had neither administrative skill nor the desire to learn them. They were the dispossessed ruling class and were not about to "work" for a living. That particular humiliation was reserved for Hindus and other dhimmis. Muslims were the feudal parasite class of idlers who lost their privilege and now "resent." The restoration of privilege is what Islam in the subcontinent is about.

The vast majority of Muslims in the subcontinent are illiterate peasants. What such men "really" want is not simply exhausted by what some ideological nob tells him he wants.

Anyway, what do you think would have happened if there had been no partition? What would be the death toll in the civil war since? Or would the Hindus have quickly rolled over into dhimmidom? In any case, it's hard to imagine India embracing the global economy and developing science and industry in quite the same degree it has if there had been no partition. History is not about the loss of some golden age, except in ideology. It's something we always struggle to survive, one way or the other.

Here's a line from Naipaul's Among the Believers, his account of the Islamic world and, here, Pakistan.

"His world had shrunk to a hut in a crumbling village. He was prepared for even that to crumble away further, once the faith was served." (p. 89.)

An ordinary villager. Not an Oxbridge toff.

If India had remained unpartitained, maybe it'd be like India. Not so good, huh? But let's compare it to the state of Pakistan. How many Hindus, Zoroastrians, Christians, Sikhs, and Buddhists live there now?

So where do they live now instead?

Pakistan is Muslim. It's Muslim because Muslims made it so and drove out others. They continue that effort in India. Maybe it has something to do with Islam.

Yeah, but that hardly proves the point that the partition was the worst thing: of course it was bad, but was it worse than the realistically imaginable alternatives? If you are satisfied that Naipaul's Muslim, and all the refugees from Islam, are the victims of Islam, why would the mass of non-Muslim Indians be better off in a state with a much heavier Islamic presence both in the Northwest and in Bengal?

In other words, how do we hold up India for or against an ideology or strategy of "separationism", vis a vis the Islamic world? Or, if India could have been a model for mediating a proportionately more significant presence of Islam in the modern world, how could that have worked? Is what india has today achieved bound yet to be a failure?

I'm all in favor of partition of the subcontinent: remove the source of the problem from as much of the area as possible and contain it. If India would remove the rest of the Muslims as the Muslims are doing to this day with non-Muslims in Pakistan, then fine. Quarantine the place and let them live with it. But Pakistanis are jihadis, bent on domination and that by force and violence.

India is a failed state in large part due to its continued Islamic population, parasitic on the nation and the people. The Muslims stay in India and live off it just as they do elsewhere, all the time trying to destroy it in the name of Islam Like any Irrationalists, they don't seem perturbed by pursuit of contradiction, no matter the effect. Partition is great. Let there be more of it.