A trip through the April 1 news...

British anarchists call for their dole to be paid, not in money, but, apparently, in goods or barter, as they trash a bank chanting "death to money". Getting into the spirit,

some bankers swapped their pinstripe suits for casual wear and others stayed home. Bolder financial workers leaned out their office windows Wednesday, taunting demonstrators and waving 10 pound notes at them.
[...]
One protester dressed as the Easter bunny managed to hop through the police cordon but was stopped before he could reach the Bank of England. Another black-clad demonstrator waved a fake light sabre at officers.

Musician and political activist Billy Bragg said the time was now to make a difference.

The Queen is so appalled, she is thinking of fleeing to Canada.

Osama bin Laden works at Pearson Airport loading security-cleared luggage on departing flights, while the wife of a mafia drug lord sorts in-bound luggage before it gets to customs.

And, Lenin has finally come around to identifying with the impoverished condition of the workers:

In no surprise, French Jews are giving up the French language and fleeing to America.

But Jewish-American academics cast doubt on assertions that we are currently witnessing a rise in antisemitism, though no one can be sure just what words were covered up in duct tape. Readers are invited to lay their bets in comments: 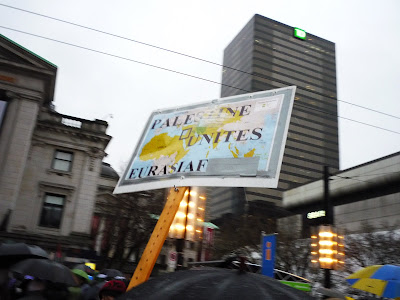 Meanwhile, Vancouverites are raising $250,000 to build "artificial roots" for a long dead tree. 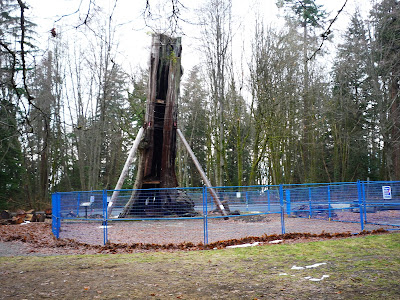 Finally, God is punishing Vancouverites for indulging in the global warming religion, with snow spotted at sea level, in April.
Posted by truepeers at 1:09 p.m.

Yeah, that snowstorm this morning was something else, I wouldn't have believed it if I hadn't seen it with my own eyes.

May I humbly submit, as a runner-up to your list, an item for honorable mention:

...US President Obama presenting Her Majesty Queen Elizabeth an I-Pod as his official gift to her (even though she already had one), an I-Pod whose contents included audio of Obama speeches?

This story is a few hours shy of qualifying as an April 1st story:

Miss Universe says she had a lot of fun visiting Guantanamo Bay:

You're not serious about the ipod, are you?

Must be. I heard he also gave her "Triple A" rechargeable batteries. Made in America. They keep on running and running and still campaigning.

You're not serious about the ipod, are you?

It's true. Sorry, forgot to include the link:

Such gestures may soon be a thing of the past. From Newsweek:

According to a person close to the situation, Obama hasn't yet appointed a chief of protocol and his staffers, still unpacking, didn't realize that the State Department has an entire office dedicated to foreign visits.

You know sometimes we might discount all the evidence that an American president is actively cultivating a fascist-style cult of personality, and then things like this hit you and you have to say: look at the facts!